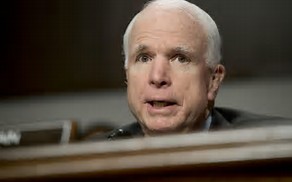 WASHINGTON — Rep. Brad Sherman (D-Calif.) was in disbelief during Sen. John McCain’s questioning of James Comey — and it showed on his face.

Sherman was spotted in the hearing room shaking his head during McCain’s awkward questioning that even Comey admitted “confused” him.

“I was, perhaps, too robustly [shaking my head] yes,” Sherman admitted. “I could not fathom how he was making this argument.”

Does John McCain even know what’s going on?

McCain (R-Ariz.) argued Comey has a “double standard” for publicly announcing Hillary Clinton was cleared of any criminal wrongdoing for her email server investigation, whereas President Trump has not been publicly vindicated by him.

Comey explained Clinton was cleared because the email server case was “completed,” whereas the separate Russia investigation involving Trump affiliates is “nowhere near” complete, so a conclusion cannot yet be made.

Sherman was baffled by the comparison.

Sherman on Wednesday joined in the liberal effort to draft articles of impeachment against Trump. After the Comey hearing, Sherman said the testimony provided further evidence that Trump tried to quash the Michael Flynn investigation.

“It was clear Comey wanted to keep his job and Trump threatened that job. Trump actually fired him,” Sherman told The Post. “Obviously his job was under threat. I believe there is obstruction of justice here.”

“I get the sense from Twitter that my line of questioning today went over people’s heads. Maybe going forward I shouldn’t stay up late watching Diamondbacks night games,” he said in a statement.

“What I was trying to get at was whether Mr. Comey believes that any of his interactions with the president rise to the level of obstruction of justice,” McCain said.

He intends to seek an answer in writing from Comey.