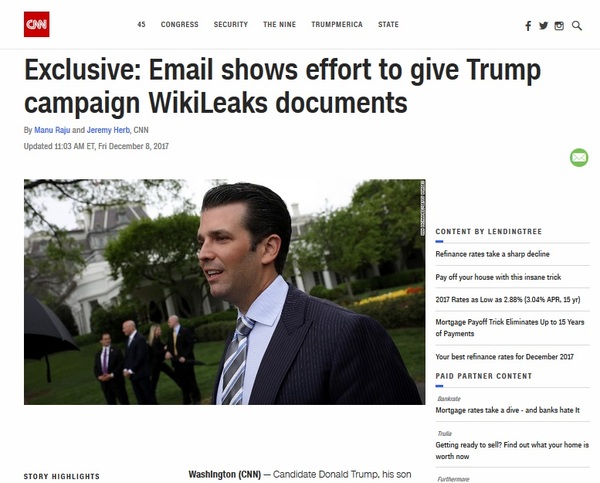 Yesterday, CNN was exposed committing another egregious fraud: publishing and repeatedly broadcasting a bogus news story smearing the Trumps.  The story remained online for at least seven hours before it was amended – about three hours after it was exposed as grossly inaccurate by the Washington Post.  After it was finally “corrected,” CNN didn’t even have the class and good sense to actually apologize for its major error.  It was a fitting Friday finale for a week of fake news featuring Brian Ross’s suspension by ABC News and MSNBC caught trying to fudge the ratings.

CNN’s original story went online on Friday morning at 8:05 A.M. E.T., and it was minimally updated at 11:03 A.M. E.T.  The headline crowed, “Exclusive: Email shows effort to give Trump campaign Wikileaks documents.”  In each of these early versions, a large photo of Donald Trump, Jr. was at the top.  The New York Times described what CNN had done by publishing:

… an erroneous report that Donald Trump Jr. had received advance notice from the anti-secrecy group WikiLeaks about a trove of hacked documents that it planned to release during last year’s presidential campaign.

In fact, the email to Mr. Trump was sent a day after the documents, stolen from the Democratic National Committee, were made available to the general public. The correction undercut the main thrust of CNN’s story, which had been seized on by critics of President Trump as evidence of coordination between WikiLeaks and the Trump campaign.

Later Friday evening, time-stamped 10:18 P.M. E.T., CNN was compelled by an avalanche of negative coverage during the day, including in numerous MSM outlets, to publish another separate news article attempting to explain away what had happened.  The article was titled “CNN corrects story on email to Trumps about Wikileaks”:

“CNN’s initial reporting of the date on an email sent to members of the Trump campaign about Wikileaks documents, which was confirmed by two sources to CNN, was incorrect,” CNN said in a statement. “We have updated our story to include the correct date, and present the proper context for the timing of email.”

In its updated story, CNN acknowledged, “The new information indicates that the communication is less significant than CNN initially reported.”

A CNN spokesperson said there will not be disciplinary action in this case because the reporters followed CNN’s editorial standards process, which requires review and approval of the use of anonymous sources.

Before the correction, the story – which relied on multiple sources who described the email to CNN –  had been heavily promoted by the network. CNN devoted multiple segments to discussing it on air. It was also the lead story on its homepage for much of Friday morning and into the afternoon. During that time, CBS News also reported that it had matched CNN’s initial reporting.

The original CNN “exclusive” was co-written by CNN’s senior congressional correspondent Manu Raju, who is a familiar on-air presence at the “NeverTrump” cable news channel.  Raju, 37, received an undergraduate degree in business administration from the University of Wisconsin Madison, and he has been gifted with numerous prestigious journalistic awards for his reporting for CNN and, before that, Politico.

The implication of CNN’s fake story is that the news channel had obtained evidence that linked Donald Trump and his son Don Jr. to underhanded clandestine efforts that encouraged and may have allowed them to access encrypted information damaging to the Hillary Clinton campaign obtained by WikiLeaks before it became public at its website.  It had been alleged, and became an article of MSM faith, that WikiLeaks’ trove of purloined and embarrassing internal Democratic National Committee documents was given to WikiLeaks by the Russians, who, the theory goes, are the ones who “stole” it.  If the CNN story had been true, Trump’s enemies would have been able to spin it as finally providing some concrete evidence – pretty much absent after a year of official investigations and continual journalistic digging – that collusion between the 2016 Trump campaign and Russia had actually occurred.

But at 1 p.m. ET, the [original CNN] story unraveled. The Washington Post obtained a copy of the email in question, which CNN did not have, and reported it was sent on the afternoon of September 14 – 10 days after CNN had reported it was sent. The Wall Street Journal quickly matched The Post’s reporting and The Daily Caller posted a copy of the email.

CNN corrected its story at 3:45 p.m. ET. A network spokesperson said that as soon as the network had reviewed its reporting and independently confirmed that the story was wrong, it moved to correct it. CBS News also corrected its story.

CNN’s corrected “updated” version of its original Friday story added a short paragraph at the top:

Correction: This story has been corrected to say the date of the email was September 14, 2016, not September 4, 2016. The story also changed the headline and removed a tweet from Donald Trump Jr., who posted a message about WikiLeaks on September 4, 2016. [bold italics original]

In the next paragraph, however, CNN tried to retain the original story’s now tenuous lead:

Candidate Donald Trump, his son Donald Trump Jr. and others in the Trump Organization received an email in September 2016 offering a decryption key and website address for hacked WikiLeaks documents, according to an email provided to congressional investigators.

The September 14, 2016 email to Donald Trump, Sr. and Trump Jr. was sent by Mike Erickson, according to the Washington Post the president of an aviation management company.  Erickson was not known to the Trumps.  In correcting its similar erroneous story, CBS News – but not CNN – admitted:

At that point, however [when Erickson’s email with encryption key was sent to the Trumps], the offered data was already available publicly online.

Both Raju and Herb declined to comment through a spokesperson.

The error prompted Donald Trump Jr. to attack CNN. In a series of tweets, he characterized the story as fake news and went after the credibility of the network. Julian Assange, the founder of WikiLeaks, also attacked CNN and CBS News. [Trump also mentioned CNN’s faux pas in his speech to a large enthusiastic crowd in Pensacola, Florida Friday evening, but misspoke when he said that CNN had “apologized.”]

Friday’s correction is not the first high-profile error in recent memory for CNN. Earlier this year, the network retracted a story about former White House communications director Anthony Scaramucci. Three journalists, including the executive editor in charge of the network’s new investigative unit, resigned their positions after the publication of that story.

[Alan] Futerfas, the lawyer for Trump Jr., said that the real estate executive received “tons of unsolicited emails” during the campaign.

Furtefas and others speculated that a source at the House Intelligence Committee had leaked the information to CNN and CBS News.  Donald Trump, Jr. testified before the committee on December 6 and reportedly was asked about Erickson’s email.  The Daily Caller article continued:

“The [Erickson’s] email was never read or responded to – and the House Intelligence Committee knows this,” he [Furtefas] said in a statement.