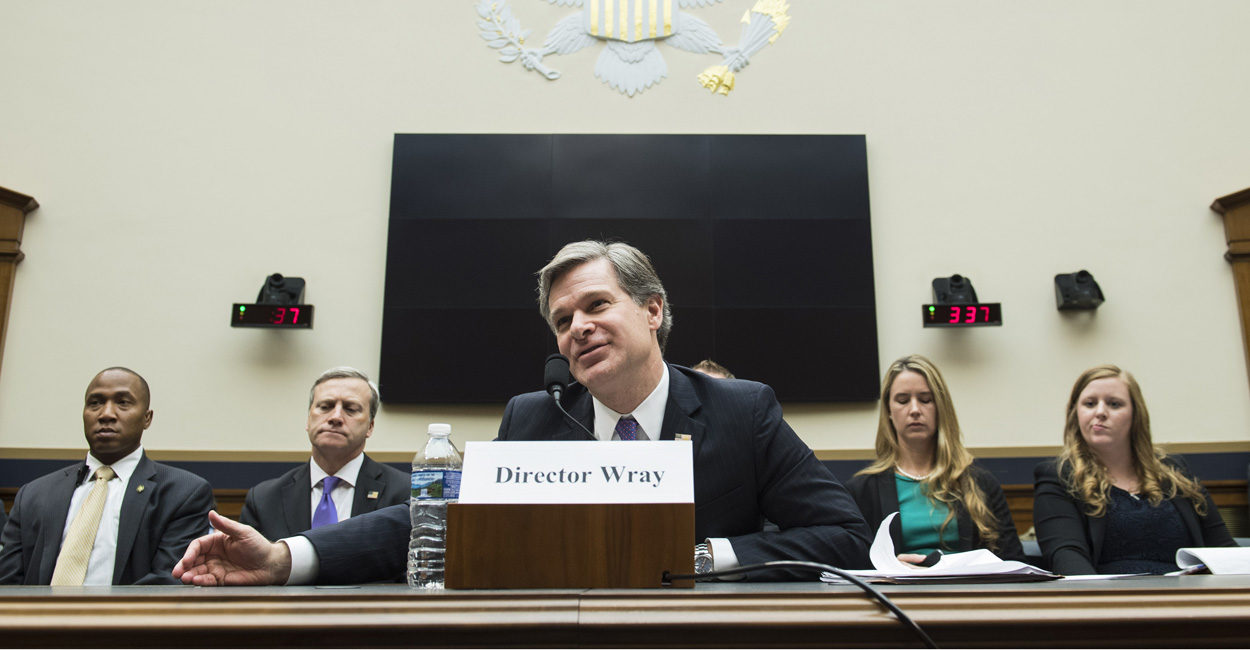 FBI Director Christopher Wray told a congressional hearing on Thursday that investigations should never be politicized, while at the same time defending the integrity of the people who serve in the bureau.

“I am emphasizing to every audience I can inside the bureau that our decisions need to be made based on nothing other than the facts and the law and the rules of our processes and our core values at the FBI, and not based on any political considerations on any side of the aisle,” Wray told the House Judiciary Committee.

His testimony at the oversight hearing comes after revelations that cast doubt on the impartiality of the FBI and Justice Department during investigations of former Secretary of State Hillary Clinton’s email server and the investigation of alleged collusion between President Donald Trump’s campaign and the Russians.

A top FBI investigator, Peter Strzok, was recently removed from the special counsel’s probe after revelations that he texted anti-Trump, pro-Clinton messages to a woman with whom he was allegedly having an extramarital affair.

Strzok also worked on the Clinton email investigation, and is thought to have changed the language in former FBI Director James Comey’s speech clearing Clinton of criminal wrongdoing, by replacing the term “gross negligence,” which has a legal meaning, to “extremely careless.”

“Surely, you’ve examined the distinction between ‘extreme carelessness’ and ‘gross negligence’ that is within the statute,” Rep. Steve King, R-Iowa, asked. “You are really going to tell us today you don’t have an opinion on that?”

Wray responded that “gross negligence” is the language in the statute, but followed with a caveat.

“Almost anybody who grabbed a thesaurus would say that ‘gross negligence’ and ‘extremely careless’ are pretty darn close to each other,” Wray said. “I would also say the handling, including the handling of the statement that Director Comey issued, is exactly what the inspector general is investigating.”

Meanwhile, Senate Judiciary Committee Chairman Chuck Grassley, R-Iowa, asked the FBI in a letter to prioritize producing documents relating to the activities of Strzok. Grassley asked the FBI for text messages and communications containing favorable or unfavorable statements about Trump or Clinton.

During the House hearing, Rep. Matt Gaetz, R-Fla., pushed the FBI chief on whether the bureau gave Clinton special treatment.

Wray again said the bureau should wait for the official findings.

“It’s appropriate that we wait in this instance until we have all the facts, until the last witness, as he said, has been interviewed, and then, based on the facts that we have, take appropriate action,” Wray said. “I completely understand the reasons you’re asking the question. I sympathize with them.”

Throughout most of the hearing, Wray deflected in answering the questions. On Republican questions about the Clinton email probe, he noted that the FBI’s inspector general is reviewing how the probe was conducted. When Democrats on the committee asked about the Russia probe, Wray said it would be a matter for special counsel Robert Mueller to address.

“My preference is not to be one of these people who act first and ask questions later kind of guys, but an ask questions first and then act kind of guy,” Wray said. “These matters are being looked at, as they should be, by somebody outside the FBI, and when those findings come to me, I will take appropriate action.”

House Judiciary Committee Chairman Bob Goodlatte, R-Va., said it would be “unacceptable for FBI employees to permit their own political predilections to contaminate any investigation,” adding that “even the appearance of impropriety will devastate the FBI’s reputation.”

However, the committee’s top Democrat, Rep. Jerrold Nadler of New York, pressed the FBI director about Trump’s tweets attacking the bureau’s reputation as being in “tatters.”

“We have heard other veterans of the FBI and the Department of Justice push back against this attack on the reputation of the FBI,” Nadler said. “We haven’t heard from you. Will you respond to this tweet from the president? Is the FBI’s reputation in tatters?”

Wray didn’t challenge the president directly, but defended his team.

Rep. Eric Swalwell, D-Calif., opined, “It is sickening to sit here and listen to the good names of people like Bob Mueller and James Comey smeared and the work of your agents has become politicized.”

White House press secretary Sarah Huckabee Sanders stressed during the press briefing the president wasn’t attacking the FBI itself, but rather the “FBI’s political leadership” and expressed confidence that Wray can “clean up” the problems from Comey’s time as bureau chief.

Gowdy cited the secret meeting between former President Bill Clinton and then-Attorney General Loretta Lynch days before the Comey speech exonerating Hillary Clinton, and outlined what he considers other challenges to the credibility of the federal government’s law enforcement. He also raised questions about the number of Democratic campaign donors serving as prosecutors on Mueller’s team.

I think what frustrates some folks is when Director Comey wanted a special counsel for President Trump, he leaked. When he didn’t have confidence in Loretta Lynch, he didn’t leak. … We’ve had an acting [attorney general] fired. We’ve had an FBI director fired. And we can’t manage to find prosecutors who haven’t donated to presidential candidates.

Later in the hearing, a question came up about whether to prevent certain investigators or prosecutors from engaging in political activities.

“I’d have to think about the First Amendment implications of that. I certainly take the point,” Wray said. “My guess is that you could encounter similar concerns when looking at an individual’s charitable contributions to particular 501(c)3 organizations that have a particular social view, for example.

“So I think questions of bias and objectivity back and forth have to be taken very seriously,” he said.

(First reported by Fred Lucas and reported by The Daily Signal) http://dailysignal.com/2017/12/07/fbi-chief-vows-to-keep-politics-out-of-probes-after-trump-says-bureaus-reputation-is-in-tatters/   (December 7, 2017)