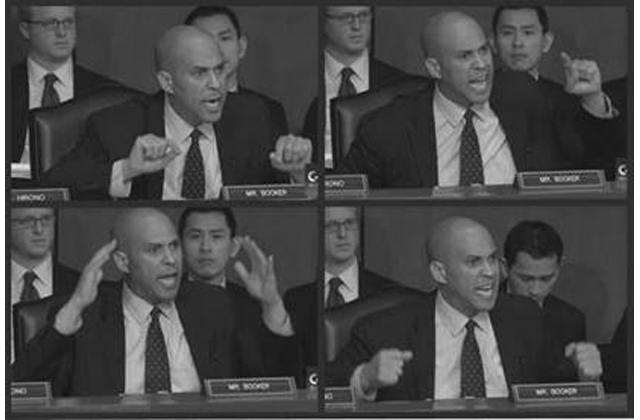 The junior senator from New Jersey shocked Capitol Hill Tuesday with his over-the-top ranting at Homeland Security Secretary Kirstjen Nielsen during her testimony before the Senate Judiciary Committee.

Sen. Cory A. Booker (D.-N.J.), a bachelor, went after Nielsen with a hostility that is rarely seen with female witnesses, while concentrating on the secretary’s assertion that she did not hear President Donald J. Trump used a swear word to refer to developing countries.

The senator told those in at the hearing, that when Sen. Richard J. Durbin (D.-Ill.) told him his version of the president’s remarks he wept.

“I hurt,” he said. “When Dick Durbin called me, I had tears of rage in my eyes.”

Booker said that the secretary was callous if she did not share the senator’s emotional crisis.

“For you not to feel that hurt and pain and to dismiss some of the questions of my colleagues saying: ‘I’ve already answered that line of questions,’ when tens of millions of Americans are hurting right now, because you are worried what happened in the White House? That’s unacceptable to me,” he said.

The senator then told the secretary of homeland security that he is anxious about threats against his own life: “There are threats in this country people are plotting–I receive enough death threats to know the reality.”

Like other Democrats, Booker also accused Nielson of lying under oath when she repeated that she had not heard the comments that Durbin attributed to the president.

Wednesday, Nielsen released this statement regarding Senate Democrats, led by Booker, accusing her of perjury: “I decline to spend any more of my time responding other than to say the obvious — I did not and will not lie under oath and say I heard something I didn’t.”