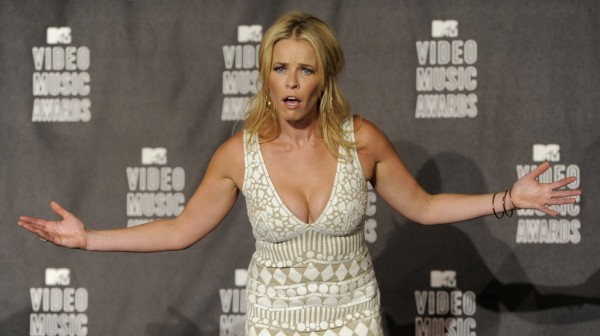 As you might expect, former Obama staffers-turned-podcasters now gleefully attacked the Trump administration as incompetent and those working in the White House as liars on Chelsea Handler’s Netflix show. In the July 21st episode of Chelsea, titled “When Chelsea Met Harry,” President Trump was referred to by the former staffers as the “asshole in the White House.”

Pod Save America is a podcast by four former Obama staffers – Jon Favreau, Dan Pfeiffer, Jon Lovett, and Tommy Vietor. Three of them were guests on Chelsea Handler’s show. Lovett was the one who referred to Trump so crudely. Donald Trump, Jr. is “not a smart person,” according to these geniuses and Chelsea piped in with, “He looks dumb.” Pot/kettle, Chelsea.

Vietor said that Jared Kushner should leave the White House because “he hasn’t done shit in his life besides fail up in real estate and marry into a job. He shouldn’t be negotiating Middle East peace.” All three podcasters enjoyed referring to anyone near Trump as incompetent and liars. They agreed that healthcare reform is not dead in Congress, though. Their counter to the hopelessness felt by so many loser Democrats is to keep protesting and reaching out to members of Congress.

Chelsea asked if it was legal to stop White House briefings and they all said yes. Chelsea not only got that wrong – the briefings haven’t been stopped, just some aren’t televised – but she also showed her ignorance by trying to make it a legal issue.

Lastly, a game was played where Chelsea named a Trump administration member and the podcasters were to give a one-word response. It went like this: Ivanka – “complicit,” Jared Kushner – “jail,” Kellyanne Conway – “liar,” Mitch McConnell – “turtle” and “creep,” Sarah Huckabee Sanders – “shameless liar.” They couldn’t even limit it to one word for her. Chelsea said of Sanders, “Yeah, there’s something very tricky about her. She’s a little slick and dangerous.” Putin – “lucky,” and finally, Bannon – “gross.” Chelsea commented of Bannon and Trump, “I hope they are in a prison cell together one day.”

As she ended the show, Chelsea said, “To all the Republicans trying to repeal Obamacare, better luck trying to kill millions of Americans next time.” There she goes again, showing her ignorance.