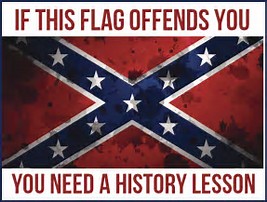 A teacher at Fresno’s Computech school is under fire for displaying a Confederate flag with other “historical flags” in her classroom.

The teacher, Kari Pruett, said the flags “are symbols used in teaching about our country’s history.”

According to the The Fresno Bee, the display of the Confederate flag among the other “historical flags” came under greater scrutiny after that flag was highlighted on a yearbook page dedicated to the teacher. Pruett did not design the page, rather, it was designed by a student who also included the image of a white cross that is associated with the Democrat-organized Ku Klux Klan. (The KKK was as Democrat organization formed to frighten black Republicans out of voting following the Civil War.)

The yearbook page was reworked and Pruett was asked to remove the Confederate flag from the display of “historical flags.”

A parent who did not want to be identified said, “Why is she not being reprimanded in some way? If South Carolina, along with other states, have banned that flag from being hung in public buildings because of what it represents, why is she allowed to hang it? If California prohibits state agencies from selling or hanging that flag, why is she allowed to?”

The parent did not suggest how students were supposed to learn the history of the animosity between the United States of America and the Confederate States of America without studying it in school. After all, the bloody war fought between the two countries from 1861 to 1865 cost well over 600,000 lives and witnessed battles in western parts of the United States as well. In fact, Arizona was a Confederate territory during the war. So the Civil War was very close to California.

Nevertheless, a teacher in the Folsom Cordova Unified school district was placed on “administrative leave” earlier this year for displaying a Confederate flag “alongside a Civil War Union flag, potentially in preparation of a history lesson.”