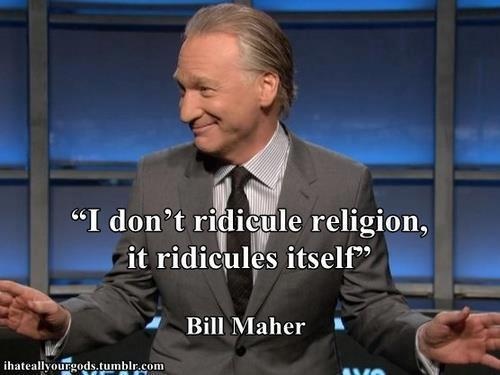 Natural disasters are no laughing matter, but you’d never know that recently watching God-denier Bill Maher and his “Real Time” show audience. Maher appeared giddy with delight that homes of certain high-profile man-controlled climate change “deniers’ were in the path of destructive hurricanes.

Meanwhile, during an interview, actress Jennifer Lawrence suggested hurricanes were “signs of Mother Nature’s rage and wrath” for not believing in man made climate change and electing Donald Trump.

Maher and Lawrence and other global warming barkers always fail to factor in the God-factor. Natural disasters aren’t left wing attack dogs who target those who dare question the cogency of man-caused and man-controlled climate change.

We know this because while Maher and Lawrence and others were superciliously wagging accusatory fingers, hurricanes Harvey and Irma wreaked havoc on some predominantly left wing metropolises that went for Hillary Clinton: Houston and Harris County, Texas and Key West and Miami and Palm Beach and Orange County, FL.

It is both arrogant and ignorant to cast blame for natural disasters on people, let alone people smart enough to question something that is quickly morphing into what seems like an autocratic religion across the globe.

Man-caused warming is questioned because there is indisputable scientific evidence this isn’t the Earth’s first rodeo when it comes to cyclical cooling and warming.

The Earth experienced periods of glaciation followed by melting long before Leonardo DiCaprio’s excessive use of private jets and the construction of Al Gore’s energy devouring Nashville dream home.

Robert Ballard, the world-renowned underwater archaeologist who discovered the wreckages of the Titanic, the Bismarck, RMS Lusitania, USS Yorktown and others, has linked one of those previous melting periods to Noah’s Great Flood.

In 2012, Ballard told ABC News, “Where I live in Connecticut was ice a mile above my house, all the way back to the North Pole, about 15 million kilometers, that’s a big ice cube.” “But then it started to melt,” he said. “We’re talking about the floods of our living history.”

Ballad said he believes he discovered proof of Noah’s flood in the Black Sea off the coast of Turkey when he discovered “traces of an ancient civilization hidden underwater since the time of Noah.” Ballad said his group discovered evidence of “not just a slow moving, advancing rise of sea level, but a really big flood that then stayed” and “the land that went under stayed under.”

Ballad carbon-dated unearthed shells discovered 400 feet below the surface, establishing a timeline which happened to occur around the same time as Noah’s flood. Ballad described his discovery as what was like “a bad day…at some magic moment it broke through and flooded this place violently, and a lot of real estate, 150,000 square kilometers of land, went under.”

If Ballad’s Black Sea discovery is as accurate as his other findings, he’s likely uncovered evidence which leads to the Bible. And the God-factor. The Bible says Noah’s Great Flood was a natural disaster sent by God in response to a world gone sinfully-bad.

Asking why is a good start. Acknowledging “biblical amounts of rainfall” is a good step toward having an intelligent conversation.

Robinson and Maher claim they are science guys. And Lawrence, well, she has a loud mouth and nice face. Rather than pointing judgmental fingers at fellow humans, they should consider Ballad’s discovery and then open the Bible, which speaks to both God’s judgment and grace poured out on a world filled with God (not science) deniers.