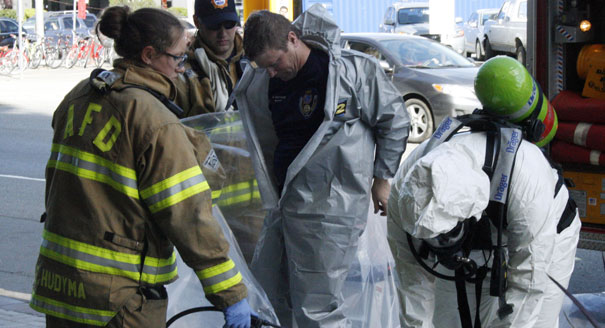 Earlier in the day, police shut down the suburban Atlanta neighborhood where she lives after they were notified that the suspicious packages had arrived in the mail.

Fox News confirmed late Thursday the ”incident [is] being investigated by the FBI and other agencies.”

WSB-TV in Atlanta broke the news on Thursday afternoon, reporting that “Authorities were called to the neighborhood where Karen Handel lives in Roswell for the report of a suspicious package Thursday afternoon.”

“Police say Roxburg Drive off Old Alabama Road in the Country Club of Roswell is shut down while crews investigate,” WSB reported.

Handel is the Republican candidate running against Democrat Jon Ossoff in the special election to replace Rep. Tom Price (R-GA), now the Secretary of Health and Human Services, in Georgia’s Sixth Congressional District next Tuesday.

The most recent poll gives Ossoff a 3 point lead over Handel, but that poll was completed on Tuesday, one day before the shooting of Republican Majority Whip Rep. Steven Scalise (R_LA) during a practice session of the Republican Congressional baseball team in Alexandria, Virginia on Wednesday.

This afternoon we had some suspicious packages delivered to our house and to our neighbors. The packages contained threatening letters and a suspicious substance. The police were quickly notified and street is now being blocked off. We will continue to coordinate with law enforcement as necessary.

“The FBI also told Fox News that the FOX 5 Atlanta affiliate in Atlanta, Ga., was in receipt of an unknown white substance,” Fox News reported:

According to FOX 5 Atlanta, the document in the package threatened violence, and also read in part: “America’s terrorist soldiers are raping and killing innocent Muslims by the thousands. Republicans are literally ushering in the apocalypse by ignoring the impending climate disaster.”

The package was postmarked in Greenville, South Carolina. Law enforcement officials said the suspicious packages delivered to Karen Handel’s Roswell neighborhood were also mailed from Greenville, according to FOX 5 Atlanta.

“Ossoff is also claiming to be the victim if of intimidating threats, although he was less specific than Handel in a statement Thursday,” the Washington Examiner reported:

“Our campaign has received a number of threats, some of which have intensified in recent days, and we have reported them to local police as well as taken prudent precautions,” he said released about an hour after Handel released her statement.

“These recent events speak to the need for a redoubled commitment to civility and unity,” Ossoff continued. “The overwhelming majority of Americans want decent and civil political dialogue, and candidates for office and elected leaders must continue to call for calm and unity, even when there are intense differences of opinion.”

News of the suspicious letters arriving at Handel’s house comes five days before election day on Tuesday in what has become the most expensive Congressional race in American political history.

Handel’s Democratic opponent Ossoff has raised more than $23 million, the vast majority from outside the district, as of May 31, according to Federal Election Commission records. Handel has raised only $4.5 million over the same time period, but both candidates have benefited from significant SuperPAC and party expenditures on their behalf.