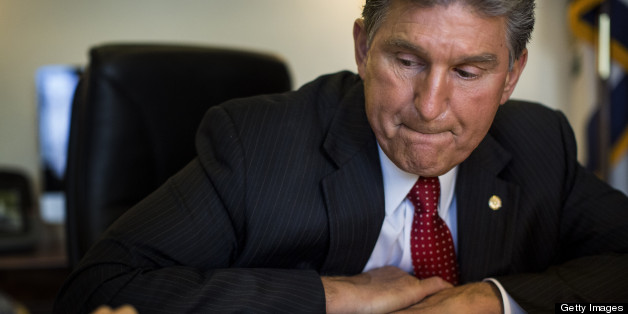 A Republican-aligned group aiming to strengthen the party’s majority in the Senate is targeting Democratic senator Joe Manchin (W.Va.) for costly renovations he made to the West Virginia governor’s mansion when he held the office a decade ago.

The new ad from Senate Leadership Fund, a Super PAC, is titled “Manchin’s Mansion” and references the $1 million in renovations Manchin ordered shortly after he was elected governor in 2005 that completely transformed the residence.

Manchin, according to reports, included the installation of a whirlpool tub, 12 new flat-screen TVs, and a complete renovation of the master bedroom, which was given a “sit-down steam shower and a walk-in closet.”

The mansion’s third floor was turned into a “game room and media center” equipped with eight high-definition TVs, including a 50-inch flat-screen, which at the time would have cost several thousand dollars. It was given two bedrooms, two bathrooms, and a kitchen. The floor was also given a full bar and a storage area specifically for the purpose of storing liquor and beer.

A spokesman said at the time that the floor was primarily intended as a place for Manchin to conduct business.

The ad also brings up Manchin’s decision to erect a party tent in mansion’s backyard that contained a stage, a hardwood dance floor, a red carpet, five chandeliers, and seats for 150 people. The tent, described by the spokesman as “an extension of the mansion,” was climate-controlled and had temporary bathrooms attached.

The creation of the party tent, which remained throughout Manchin’s entire tenure as governor, resulted in Manchin being reprimanded by the West Virginia Ethics Commission, which complained that the alteration to the governor’s mansion was never approved.

Manchin not only erected the tent, but also ordered the demolition of part of the mansion’s sunroom to build a doorway that provided easy access to the tent.

Though taxpayer funds were not spent on the purchase of the tent, it was reported that Manchin’s annual holiday parties cost taxpayers roughly $70,000 each year.

The digital ad buy is part of a $500,000 campaign that will attack not only Manchin, but also Democratic senators Claire McCaskill (Mo.) and Joe Donnelly (Ind.).

Senate Leadership Fund has already created websites to highlight each of the incumbent Democrat’s greatest vulnerabilities.