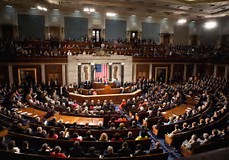 Bartiromo asked Scalise about the possibility of Congress forgoing its August recess to get those bills through.

Scalise at first said he believed deadlines would force people to come to the table, but added they would stay in and get it done when asked about “not taking a vacation.”

BARTIROMO: You got to admit, the American people are just outraged by the calendar in terms of Congress. I mean, you have got – what, 38 days left or less in terms of actually working. How is it possible that you guys have the entire month of August off? Is it possible that if you don’t get tax reform done that you will forgo your August recess and you’ll keep working until you get this done?

SCALISE: Well, I have always been somebody that says you get your work done while you are there. There are deadlines for a reason. It forces people to come to the table. You know, we have no working on healthcare and tax cuts for months now. And ultimately you need those deadlines to force the folks that are still not there yet –

BARTIROMO: So you’ll get it done?

SCALISE: — to focus and get the job done. We have to get it done. We have to pass health care reform, and we’ve got to cut taxes and simplify the code. Imagine if you can actually do your tax returns on a postcard.

SCALISE: Over 90 percent of Americans will get that with our bill. And you cut tax rates for everybody and repeal –
(CROSSTALK)

BARTIROMO: And if you don’t will you not take vacation?

SCALISE: We are just going to stay in and get it done, Maria. That is a thing. You know, we’re going to get the job done. We have to for the American people. And this economy is waiting. There is so much demand that is pent-up. Let’s get it done.