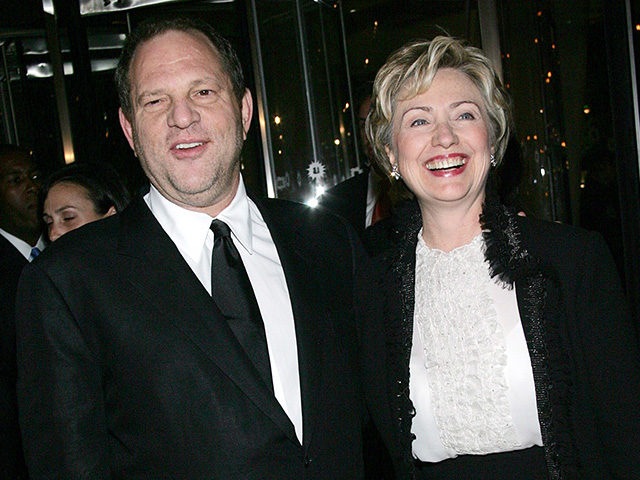 For a woman who sold herself as one of the most qualified and intelligent people ever to run for President, Hillary Clinton can certainly play dumb when she wants to.

In a Wednesday night interview with CNN’s Fareed Zakaria, Clinton claimed that her longtime pal Weinstein was leading a secret life as a sexual predator, and that she knew nothing about his extracurricular activities. That might be fair – after all, Weinstein seemed to hide his behavior from people in political power, the Obamas and Clintons included.

But Clinton also claimed that she would be unable to return the money Weinstein gave and bundled for her Presidential campaign because there was “no way to give the money back.” She’d “re-donate” some of the money she received personally when she makes her regular 10% tithe at the end of the year, instead.

“Well, there’s no one to give it back to,” Clinton told Zakaria. “What other people are saying, what my former colleagues are saying is they’re going to donate it to charity, and of course I will do that.”

“I give 10 percent of my income to charity every year,” Clinton continued. “This will be part of that. There’s no doubt about it.”

But the money she says she’ll give is from her personal income, and it’s money the former Presidential candidate would give to charity anyway, so it’s not as though she’s reaching deep into her pockets to repay the universe for her ill-gotten gains.

In fact, since she wouldn’t count political donations as personal income, anyway – the FEC simply doesn’t allow you to do that – Clinton is, essentially, saying that she’s just going to give exactly the same amount to exactly the same charities she always does, and that’s absolutely sufficient.

As far as Weinstein’s political donations, Clinton seems to indicate that she wouldn’t be able to quantify how much money Weinstein gave to her campaign, so it would be next to impossible for her to figure out an exact amount she should either give back of pay forward.

Hillary, let the Daily Wire help you out.

The Federal Election Commission keeps a handy database that tracks every check written to a political campaign. According to the FEC, Weinstein hit the FEC’s maximum in donating to Hillary Clinton’s campaign directly ($5,400 in two separate $2,700 donations) and gave an additional $33,000 to Hillary’s PAC, the Hillary Victory Fund.

So, we can give her the amount, right down to the penny. if Clinton wanted to return or “re-donate” the exact amount Weinstein personally gave to her campaign, she’d simply need to write a $38,990.45 check. She should make sure to include that 45 cents.

We can even go further back – all the way to 1999 – to track every last donation Weinstein made to Hillary Clinton at any level for any campaign. According to the Center for Responsive Politics, that number adds an additional $16,000 to the total. CRP also caught a $15,000 donation to HillPAC, a Hillary-affiliated entity, not run by the candidate herself.

But then there’s also Weinstein’s bundling – that is, the record of money he pulled together for the Clintons by hosting fundraisers and soliciting donations from friends and colleagues. It’s a little harder to find, but according to CRF, that number looks to be $1,422,683.

But, of course, that’s just what Weinstein gave Clinton during political cycle. There are plenty of records that show other Weinstein’s other Clinton-themed charitable giving. According to the Clinton Foundation’s own website, Harvey donated around $250,000 to the Clinton Global Initiative. Weinstein also gave money to Bill Clinton’s Presidential campaigns.

So, theoretically, Hillary Clinton could very well write a sizable check for exactly the amount she got from Harvey Weinstein, she just chooses not to, and instead claims money she’s already donating is enough to “fix” whatever issues she believes people have with her association.

That’s so brave of her. What a true feminist.