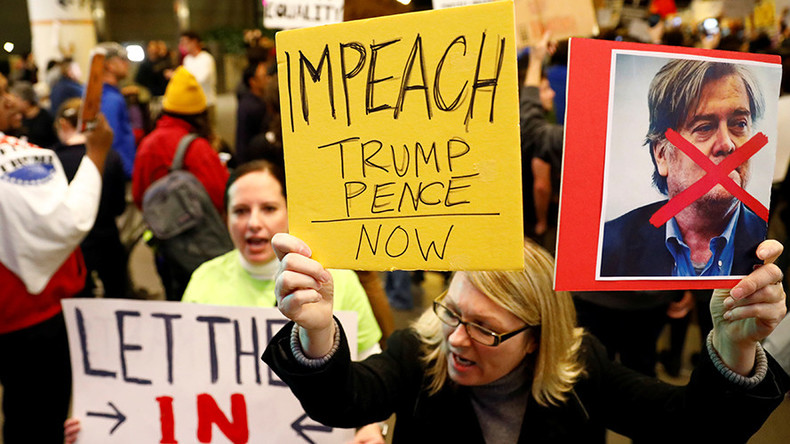 A number of wingnut Democrats introduced articles of impeachment against President Donald Trump in the House on Wednesday, doing the bidding of California billionaire Tom Steyer who has invested heavily in ads calling for the reversal of a legitimate election that he is unhappy with.

Naturally, they have no actual charges other than the vague assertion that Trump has “violated” the Constitution and they want to convene yet another Stalinist tribunal to mount an investigation.

Newsweek reports on this latest temper tantrum by elected representatives who have a serious problem with the democratic system as it currently exists and excepting themselves, want to venture into banana republic territory and normalize the nullifying of elections.

A group of Democrats on Wednesday announced that they would be filing multiple articles of impeachment against President Donald Trump, marking the most significant push to remove the president from office. The move was led by Representative Steve Cohen of Tennessee, who first declared his intention to initiate the impeachment process following Trump’s controversial “both sides” remarks in response to deadly violence at a white nationalist rally in Charlottesville, Virginia.

Cohen is joined in his efforts by five colleagues, including fellow Judiciary Committee Democrat Luis Gutiérrez of Illinois, who announced his decision to join the push two weeks ago. Also at the press conference were Representatives Adriano Espaillat of New York and Al Green of Texas. The latter is one of the president’s loudest critics, and he has previously filed his own articles of impeachment.

The others who have signed on to the effort are Representatives Marcia Fudge of Ohio and John Yarmuth of Kentucky, and Cohen said there were more in the House who had indicated that they would be willing to join the effort soon.

“We have taken this action because of great concern for our country and our Constitution, our national security and our democracy,” Cohen said. “We believe President Trump has violated the Constitution.”

Five articles of impeachment will be introduced, alleging obstruction of justice, violations of both the foreign and domestic emoluments clause, undermining the federal judiciary and undermining the freedom of the press.

The articles have zero specifics and are just a gaggle of sore losers and anti-white racists throwing handfuls of their own shit against the wall in the hope that some of it sticks.

Steyer will be proud but only six Democrats is a rather dismal return on his multimillion-dollar campaign, however, this is a guy who has a history of pissing away money on futile causes – he was one of Hillary’s biggest donors.

Even with the Never Trump Republicans, it’s hard to see this as anything other than another stupid stunt for the upcoming election year.

Impeachment promises may sell with their dippy leftist constituents who just can’t grasp the reality that Donald Trump was elected as President of the United States but the Democrats are playing with fire that could blow right back onto them if it energizes Trump supporters who see all of this crap as a larger effort to disenfranchise them.