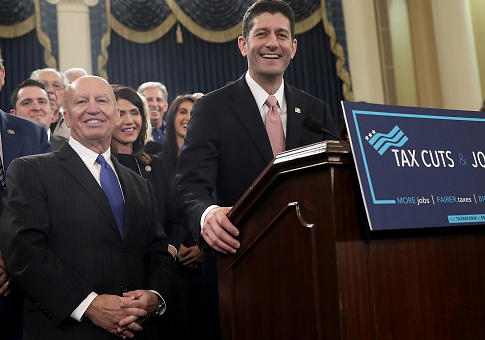 On Thursday, the House of Representatives passed its tax reform framework, the Tax Cuts and Jobs Act, in a 227-205 vote.

The legislation has five main goals, which include providing relief for middle-class families, streamlining and simplifying the tax code so Americans can file on a postcard, cutting taxes for businesses, creating jobs and increasing wages for American workers, and encouraging businesses to bring back trillions of dollars from overseas.

House Republicans say the bill is aimed to be pro-growth and offers lower- and middle-class Americans a tax cut they haven’t seen in the last 31 years. Under the plan, a typical middle-income family of four can see their taxes reduced by an estimated $1,182.

“Everybody starts getting a tax cut as you move forward,” McCarthy said. “Small business will have the lowest rate since before World War II. And think of this, we lowered it even further after it came through committee. They will only pay 9 percent on the first $75,000. So for everyone who has ever dreamed of being an entrepreneur—here’s your chance, here’s your opportunity.”

On the individual side, the bill reduces the number of tax brackets to five and lowers these tax brackets to zero, 12, 25, 35, and 39.6 percent for top earners. The bill doubles the standard deduction for families from $6,350 to $12,000 for individuals and $12,700 to $24,000 for married couples. The measure also eliminates special-interest deductions so Americans can have the simplicity of filing their taxes on a postcard.

The legislation increases the Child Tax Credit from $1,000 to $1,600 and provides a $300 credit for a non-child dependent as well as each parent to help with everyday expenses. The bill also repeals both the Alternative Minimum Tax and the death tax.

Businesses are also allowed to immediately expense new equipment as a result of the plan, which can help the skills of workers and boost jobs, paychecks, and productivity.

Republicans say the bill will help keep jobs here in the United States since it prevents them from moving their headquarters and research overseas. Under the plan, the international tax system will be modernized so it won’t be subject to a “worldwide” tax system that taxes many job creators twice.

The Tax Foundation has scored the bill and found that the proposal creates 975,000 new full-time jobs, boosts GDP by 3.9 percent, and increases after-tax incomes for Americans by 4.4 percent in the long run.

The Council of Economic Advisers also scored the business side of the proposal and found cutting the corporate tax rate would lead to an increase of 3 to 5 percent in GDP in the long run. In addition, wage and salary income for Americans is expected to increase by $4,000.

The Small Business and Entrepreneurship Council says a vote for the bill is a vote for strong economic growth, entrepreneurship, and healthy investment. “H.R. 1 is critical to fueling the optimism of entrepreneurs and the capital they need to expand their businesses,” said Karen Kerrigan, president of the council. “In addition, the strong pro-growth attributes of H.R. 1 will bolster the confidence of Americans to launch new businesses. Our gap analysis research finds there are 3.4 million ‘missing businesses’ in the United States due to the dearth in entrepreneurial activity over the past decade.”

“A strong economy and sustained growth will improve the conditions necessary for people to take risks—both for launching new businesses and investing in these startups.”

Small business owner Joseph Semprevivo says a tax cut would help his company Joseph’s Lite Cookies in numerous ways. “Small businesses like mine are crushed by the current tax burden,” Semprevivo said. “When half of a small business’s income goes to the government, very few resources are left over for business expansion and job creation.”

“A small business tax cut would allow me to invest in new recipes, expand my business internationally, and, most importantly, hire new employees,” he said. “Families depend on the success of small business to career stability and financial security. Passing the Tax Cuts and Jobs Act is a win for job creators and the people who depend on them.”