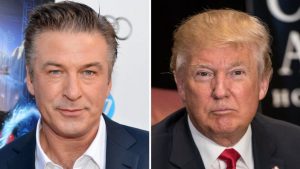 For the last year-and-a-half Alec Baldwin has played the role of Donald Trump on Saturday Night Live.
His character is neither believable or funny.

But they keep rolling with it.

President Trump: Alec Baldwin, whose dying mediocre career was saved by his terrible impersonation of me on SNL, now says playing me was agony. Alec, it was agony for those who were forced to watch. Bring back Darrell Hammond, funnier and a far greater talent! […]