WASHINGTON — Hours after Russian President Vladimir Putin claimed his military has successfully tested a hypersonic cruise missile, the head of the Pentagon’s high-tech workshop says the U.S. is on track for a series of hypersonic prototype tests in the coming years, thanks to a big spending increase in the fiscal year 2019 budget request.

Even with that funding boost, Steven Walker, the director of the Pentagon’s DARPA, warned that it is time for America to come to grips with the fact that a national push is needed if the U.S. is to keep pace with competitors in the hypersonic realm.

Hypersonic flight — going Mach 5, or five times the speed of sound — has been a dream of military planners for years, for obvious reasons. Any weapon system able to move that quickly would be able to avoid conventional missile and air defenses, and would have benefits both for manned or unmanned systems. 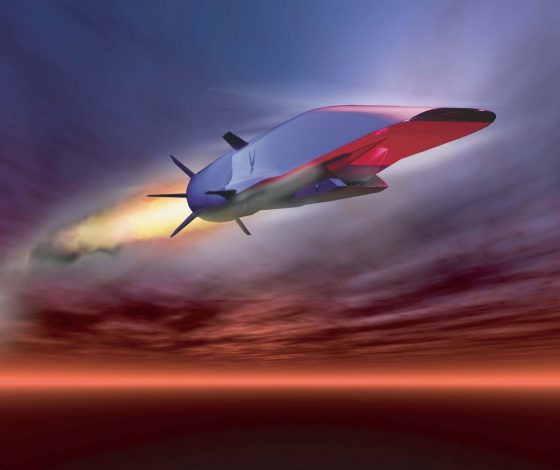 The X-51A Waverider, a U.S. Air Force test program, has successfully shown hypersonic flight is possible. But Russia may have passed the U.S. in this crucial technology. (U.S. Air Force graphic)

“We have lost our technical advantage in hypersonics,” Selva said Jan. 30 at an event hosted by the Defense Writers’ Group. “We haven’t lost the hypersonics fight.”

Whereas both those nations threw a ton of money at developing a specific capability, the U.S. has invested to “come up with a family of hypersonic systems that work without necessarily trying to close all the technology pieces at the front end,” Selva said. “We’re going to start flying these systems in 2019, you’ll see lots of flight tests, and we’re excited that these will be systems that will be very capable that we can use from standoff” range, Walker said. “These are not going to be just flying propulsion concepts through the air.” More here.

Michael D. Griffin, the undersecretary of defense for research and engineering, today spoke to more than 500 senior leaders from the U.S. government and defense industry to explore the impact of integrating directed energy capabilities into the national security enterprise at the 2018 Directed Energy Summit at the Ronald Reagan Building and International Trade Center here.

Griffin has been in this arena since the 1980s and worked for the first three directors of the original missile defense agency.

“Directed energy was then in our view an important part of our future portfolio because only directed energy could offer the kind of extended magazine, if you will, the extended range, speed of light delivery of the kill,” Griffin said. “It was the only way that in the long run you could see yourself competing with the threat and coming out on top.”

Directed energy has gone through a lot of evolutions over the years, Griffin added.

Griffin said there’s a recognition that superpower competition is again on the rise, and the United States must modernize its military if it wants to maintain its position of global preeminence.

“We will not win in a man-to-man fight,” Griffin said. “We have to have the technological leverage. That realization was responsible for the creation of my office, to elevate the role of technology maturation and deployment and I believe it is responsible for the renewed interest in directed energy weapons.”

And, directed energy is more than big lasers, the undersecretary said.

“Each of these systems has its own advantages and each has its own disadvantages,” he said. “We should not lose our way as we come out of the slough of despondence in directed energy into an environment that is more welcoming of our contributions. We should not lose our way with some of the other technologies that were pioneered in the ’80s and early-’90s and now stand available for renewed effort.”

In his capacity as undersecretary for research and engineering, Griffin said he is going to be very welcoming of other approaches that may not have had a lot of focus in recent years or decades.

There are four venues, he said, in which directed energy can serve: land, air, sea and space.

He urged the audience to not forget that because the technologies are fundamental and can be applied across those domains, all of which are important to them.

The basing strategies, the warfighting tactics, techniques, procedures, the logistics support requirements, the manpower that is needed for support, all of these things are different and are required to be different because of the different venues in which they will have to operate, he added. More here.