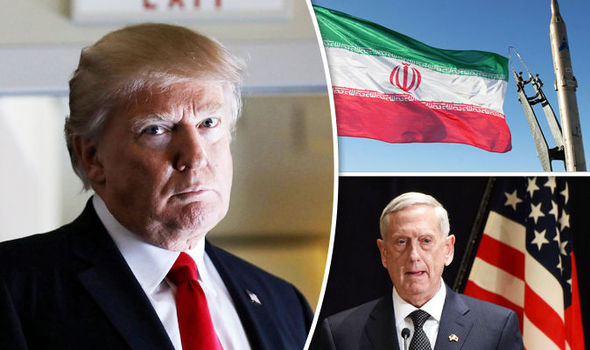 Troops from state sponsor of terrorism Iran bragged about killing hundreds of Americans as U.S. President Donald Trump begrudgingly re-certified the controversial nuclear accord struck by his predecessor.

Soon after signing the nuclear agreement in July 2015, former President Barack Obama conceded that Iran would likely use sanction relief funds linked to the deal to enrich some of its proxies, including those who have American blood on their hands.

Michael Rubin, a former Pentagon official who specializes in the Middle East and now works at the American Enterprise Institute (AEI), recently penned an article highlighting the Iranian general’s comments, delivered before an assembled group of Iranian veterans from the ongoing war in Iraq and Syria.

“This, of course, is not only a confession but also outright bragging about how the Qods Force murdered Americans in Iraq. It was the Qods Force, after all, that smuggled in explosively-formed, armor-penetrating projectiles into Iraq for insurgents to incorporate in improvised explosive devices,” notes Rubin, alluding to the Iranian general’s remarks.

According to U.S. military officials, Iran, particularly its Quds Force, was directly involved in the killing more than 500 American service members in Iraq between 2005 and 2011 by supplying Shiite extremists with military equipment such as advanced roadside bombs and rocket-propelled explosives.

As commander of the IRGC’s Quds Force (QF), the notorious Maj. Gen. Qassem Soleimani is overseeing Iran’s expeditionary missions in Iraq, Syria, and across the Middle East.

In his article, published by Commentary magazine, Rubin notes that the 2015 Iran nuclear deal and related side deals negotiated by the Obama administration have strengthened the IRGC.

“Put aside the $1.4 billion ransom [for U.S. hostages] that Secretary of State John Kerry and his aides allowed to be paid directly to the Revolutionary Guards, who supplied the plane to which the pallets of cash were provided,” he writes. “With unfrozen assets bolstering the Iranian treasury, the Islamic Republic decided to raise the Qods Force budget more than $300 million beyond the budgetary increase earlier granted to the IRGC as a whole.”

Former President Obama and his chairman of the Joint Chiefs of Staff, Gen. Martin Dempsey, conceded that Iran would use sanctions relief funds linked to the nuclear deal to fuel its nefarious activities.

During an August 2016 speech, Obama said, “Let’s stipulate that some of that money will flow to activities that we object to … Iran supports terrorist organizations like Hezbollah. It supports proxy groups that threaten our interests and the interests of our allies—including proxy groups who killed our troops in Iraq.”

“The truth is that Iran has always found a way to fund these efforts, and whatever benefit Iran may claim from sanctions relief pales in comparison to the danger it could pose with a nuclear weapon,” he added.

Echoing Obama, Gen. Dempsey told the Irish Defense Force in Dublin that same month that Iran would use its sanctions relief funds to “propagate” its “revolutionary ideology,” one of the primary functions of IRGC-QF and the Islamic Republic’s narco-terrorist proxy Hezbollah.

“The big question on the table is whether this relief of sanctions that will flow to Iran will be used to improve their economy or the lives of their citizens, or whether they will use it to propagate their revolutionary ideology,” proclaimed the highest-ranking military officer in the United States armed forces at the time. “The answer is probably a little bit of both.”

Between 2006 and 2011, the QF-trained Asaib Ahl al-Haq (AAH) militia claimed responsibility for more than 6,000 attacks on American troops in Iraq.