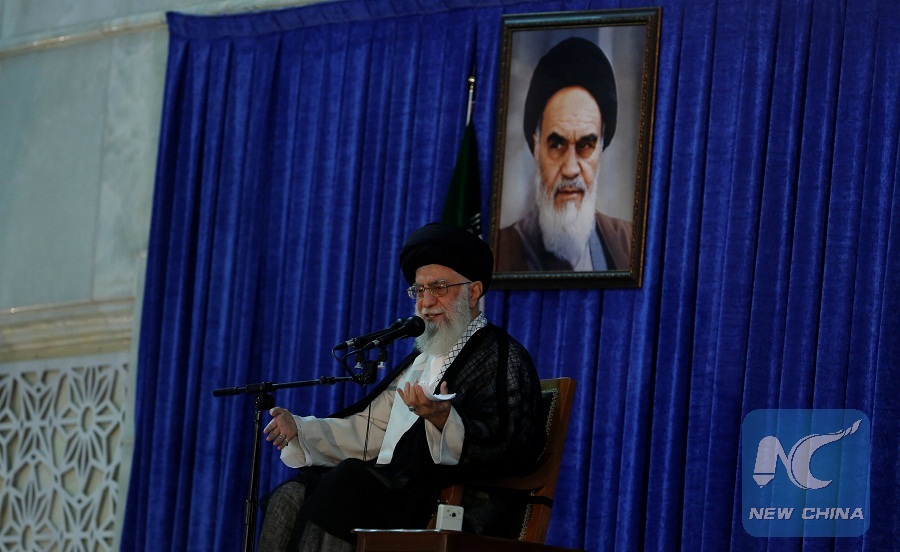 President Trump has repeatedly called the Iran nuclear agreement (or Joint Comprehensive Plan of Action), which was embraced by former President Barack Obama, “the worst deal ever negotiated.”

“As you witnessed recently, the head of US administration said the Iranian nation is a ‘terrorist nation,’” Khamenei reportedly said, referring back to President Donald Trump authorizing the Treasury Department to list Iran’s Islamic Revolutionary Guard Corps (IRGC) — known as Sepah-e Pasdaran-e Enqelab-e Eslami in Persian — as a terrorist organization.

Breitbart News previously reported, “Shortly after Khamenei’s remarks, Iran’s Foreign Minister Mohammad Javad Zarif claimed Iranians ‘are all IRGC.’ However, many Iranians – both living in the Islamic Republic and throughout the world – disagreed and rejected Zarif’s claim, creating the #WeRejectIRGC hashtag on Twitter in response.”

“Is it not hostility?” Khamenei reportedly asked the students. “This foolish comment indicates that not only are the Americans the enemies of the Iranian leadership and government, they also show hostility and enmity towards the very existence of a nation that stands against them tirelessly.”

However, it is the IRGC that boasts a long history of “hostility and enmity” and violence against the Iranian people:

1990: On March 14, 1990, the IRGC attempted to assassinate Hossein Abedini, an Iranian parliamentarian in exile and a member of the Foreign Affairs Committee of the National Council of Resistance of Iran (NCRI). The IRGC operatives blocked the vehicle he and his driver were in on his way to the Istanbul Airport in Turkey. Abedini was shot and went into a coma for 40 days. He ultimately survived the attack.

1990: On April 24, 1990, 13 Iranian terrorists carrying service passports issued by the Iranian Foreign Ministry assassinated Professor Kazem Rajabi, the representative of the National Council of Resistance of Iran (NCRI), by gunning him down near his home in Geneva, Switzerland.

1992: On June 5, 1992, Iranian agents kidnapped Ali Akbar Ghorbani, a member of the Mujahedin-e Khalq (MEK), in front of his home in Istanbul, Turkey, and tortured him to death. A captured terrorist led the police to his shallow grave on the outskirts of Istanbul.

1993: On March 15, 1993, Mohammad Hossein Naghdi, the representative of NCRI, was assassinated by IRGC operatives as he drove to his office in Rome, Italy.

1996: On February 20, 1996, terrorists dispatched from Tehran assassinated Ms. Zahra Rajabi, a senior member of NCRI, in her home in Istanbul, Turkey. She had gone to Turkey to assist Iranian political refugees. Her colleague, Abdul Ali Moradi, was also fatally shot.

2009: In June 2009, a member of Iran’s security service assassinated Neda Agha Soltan as she stood in the streets of Tehran during the Green Revolution sparked by protests against Mahmoud Ahmadinejad’s fraudulent reelection to the presidency. Iran’s Basij paramilitary forces were accused of brutally suppressing protests in the aftermath of that infamous election.

In sum, Khamenei reportedly said Americans “are not capable of understanding the fact that a nation with such a rich history and culture cannot be eradicated.”

However, it can be argued that the Iranian regime is attempting to scrub the nation’s “rich history and culture” by persecuting followers of the nation’s oldest religion, Zoroastrianism — the faith observed by many of the Persian empire’s kings — and the regime’s attempts to prevent Iranians from visiting the tomb of Cyrus the Great.