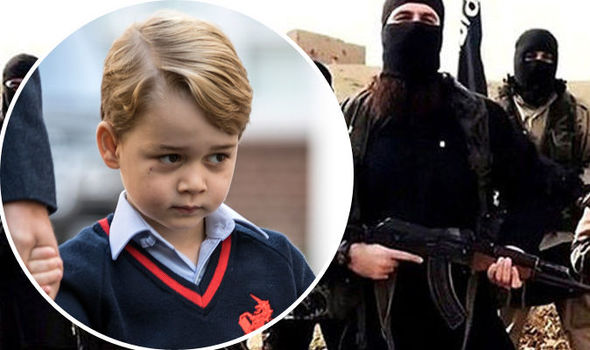 The militant Islamic force is said to be on the run, but is still, apparently, connected to the Internet.

ISIS is reportedly on the run, disarmed, and nearly beaten in Iraq, but their retreat hasn’t kept them off the Internet, where they issued a series of fresh threats over the weekend, aimed at the Duke and Duchess of Cambridge and their eldest son, Prince George.

The threat, “even the Royal Family will not be left alone,” was posted on an encrypted instant messaging app called Telegram, under a photo of Prince George outside of his primary school in Battersea, London. Under the picture, an ISIS lackey printed the words, “school starts early.”

The picture was the same one used to announce the Prince’s first day of school on the official Kensington Palace Twitter account.

The British news organization, The Daily Star, uncovered the messages after monitoring Telegram for only a short time.

According to security experts who spoke to Fox News, Telegram is a hotbed of Jihadi activity, and one of ISIS’ favorite apps for collusion. ISIS bigwigs in the Middle East used the app at least once before to recruit and command local symapthizers to bomb a Christmas market near Berlin in 2016. Authorities also believe French Jihadis may have used the same app to coordinate the 2015 Paris attacks.

But experts also tell Fox that this isn’t the first time that ISIS has targeted the British royal family, who are not only much beloved but also high-profile symbols of Western influence. It’s not surprising that ISIS would step up its threats to the West, they say, as it finds itself on retreat in the Middle East.

If they want Prince George, they’ll have to fight through several layers of security to get him, regardless. The Royalty and Diplomatic Protection Command handles issues of security at the primary school.