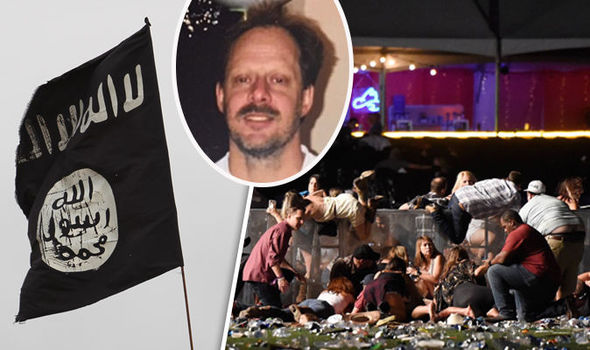 The latest issue of the Islamic State’s weekly newsletter Naba reportedly includes another claim of responsibility for the Las Vegas shooting, this time with more details of how shooter Stephen Paddock supposedly converted to Islam and became a “soldier of the caliphate.”

The Islamic State made its first claim of responsibility through its news agency, Amaq, on Monday. “The Las Vegas attacker is a soldier of the Islamic State in response to calls to target coalition countries. The Las Vegas attacker converted to Islam a few months ago,” the dispatch from Amaq stated. A similar message with slightly different wording was broadcast soon afterward by Amaq.

A longer official statement from the Islamic State was then posted by another ISIS-linked news service, Nashir News, using a channel on the encrypted Telegram messaging service:

In response to the call of the commander of the faithful Muslims (Abu Bakr al-Baghdadi al-Hussini al-Qurashi—God bless him) targeting the Crusader alliance, and after careful monitoring of the Crusader gatherings in the city of Las Vegas in the United States, a soldier of the caliphate (Abu Abd el-Bar al-Amriki)—may Allah accept him—equipped with machine guns and ammunition varied in a hotel overlooking a concert and fired at a crowd of them, including 600 between killed and wounded, until the soldier’s ammunition was finished and he became a martyr as Allah and His Messenger and the believers believer, but most people do not know.

“Al-Amriki,” the last part of the name ISIS claims Paddock secretly adopted, translates to “the American.”

The claim of responsibility made in Naba on Thursday, spotted by New York Times correspondent Rukmini Callimachi, marks the fourth time ISIS has described Paddock as one of its soldiers. Callimachi notes the infographic published in Naba specifies that the killer, identified with a slightly different rendering of the same Muslim name (“Abu Abdul Barr al-Amriki”), converted to Islam six months ago:

2. Under a picture of the Mandalay Bay drenched in blood they rehash the attack. New info: They are now claiming shooter converted 6 mos ago pic.twitter.com/2t53MSBNHq

The full text of the ISIS article reads as follows:

A soldier from the soldiers of the Caliphate targeted a large gathering of 22,000 Americans at a concert in the city of Las Vegas, inflicting nearly 600 killed and wounded.

The executor of the operation, Abu Abdul Barr al-Amriki, 64 years old, converted to Islam 6 months ago.

The brother Abu Abdul Barr stationed himself for the invasion on the 32nd floor of a hotel overlooking a concert, and opened fire continuously on the crowds using 23 guns and more than 2000 rounds, and died, may Allah accept him, after exhausting his ammunition.

Results of the Operation:

All of the information provided about the shooter and his crime would have been easily gleaned from media reports, so there is still nothing in the new statement that would prove the Islamic State’s claims.

The Islamic State statement also excludes some as-of-yet unexplained information regarding Paddock’s girlfriend, Marilou Danley, who reportedly visited the Middle East in 2016. A photo on social media shows Danley in Dubai, United Arab Emirates; media reports state that Danley mentioned a niece living in that city in the caption on her photo. Danley was in the Philippines when Paddock committed his attack on the concert venue across from his hotel; Paddock wired thousands of dollars to unknown entities in the Philippines before the attack.

Callimachi, who has pointed out that ISIS rarely made completely false claims of responsibility for attacks until fairly recently, reports that Islamic State supporters are using the bombing of a Russian airliner over Egypt as an example of an ISIS attack that was initially denied by the authorities. They also accuse American police and media of conspiring to hide the “martyrdom” of Paddock by suppressing his connection to the Islamic State.

Some eyebrows were raised on Tuesday when Clark County Sheriff Joseph Lombardo asked at a press conference, “Did this person get radicalized unbeknownst to us?” Law enforcement agencies state they have not yet uncovered any evidence to suggest the Las Vegas killer was connected to international terrorism.