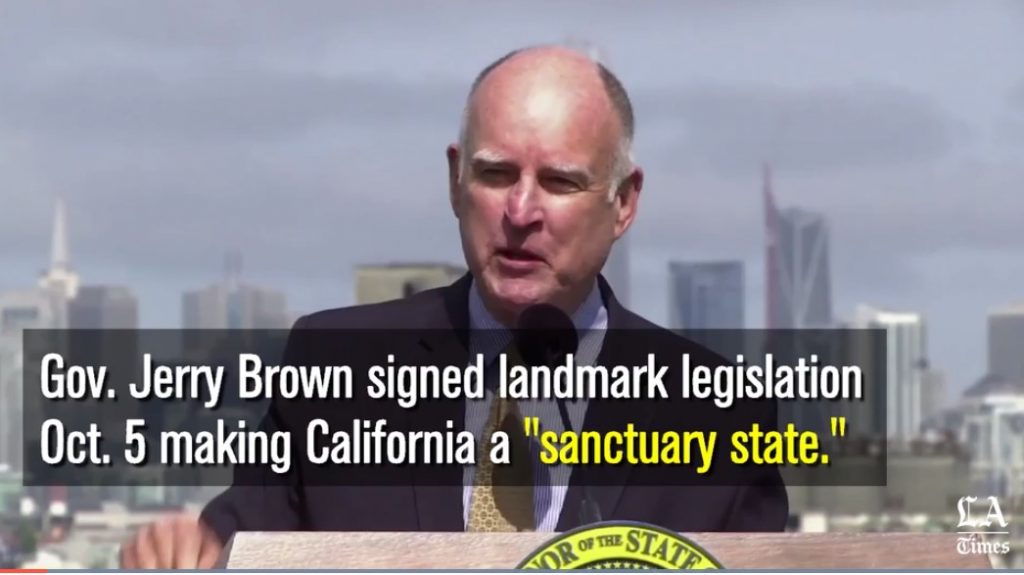 Well, it’s official. California has become a sanctuary state and in doing so, unsurprisingly, has won the blue state race concerning who could give the Trump administration the middle finger first. The liberal state decided that shielding illegal immigrants was more important than enforcing immigration laws. It’s even more nauseating, given that this is the state where Kate Steinle was killed. Steinle’s death brought national attention to sanctuary cities. She was shot and killed by an illegal alien while walking on a pier with her father in San Francisco. The illegal had been deported multiple times.

Earlier this month, the California Values Act passed the state legislature and was awaiting Gov. Jerry Brown’s signature. On Thursday, he officially signed it into law. It goes into effect on January 1. California has an estimated 2.3 million illegals residing in the state (via KCRA):

Brown’s signature means that police will be barred from asking people about their immigration status or participating in immigration enforcement activities starting Jan. 1.

Jail officials only will be allowed to transfer inmates to federal immigration authorities if they have been convicted of certain crimes.

California is home to an estimated 2.3 million immigrants without legal authorization.

“These are uncertain times for undocumented Californians and their families, and this bill strikes a balance that will protect public safety, while bringing a measure of comfort to those families who are now living in fear every day,” Brown said in statement.

The measure came in response to widespread fear in immigrant communities following Trump’s election. He railed against immigrants in his campaign and promised to sharply ramp up the deportation of people living in the U.S. illegally.

Police and sheriff’s officials, including jail officers, will still be able to work with federal immigration authorities if a person has been convicted of one of about 800 crimes, mostly felonies and misdemeanors that can be charged as felonies. But they will be barred from transferring immigrants to federal authorities if their rap sheet includes only minor offenses.

The logic behind sanctuary cities is to allow illegal aliens to report crimes without fear of deportation. There is zero anecdotal evidence to support this claim.