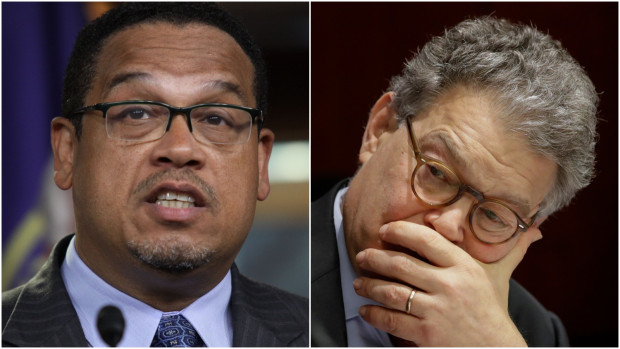 The Washington Times reports that far-left groups within the Democratic Party, chief among them Bernie Sanders supporters, are calling for the replacement of  Sen. Al Franken (D-MN) with the progressive and controversial Minnesota Democrat Keith Ellison.

A group known as “Justice Democrats” started a petition this week, demanding Al Franken resign from his post. Franken has fallen under controversy after photographic evidence emerged of the comedian turned public servant groping co-performer Leehan Weeden during a 2006 USO tour.

“Franken must go. We do not tolerate those who abuse their power,” said Justice Democrats PAC executive director Saikat Chakrabarti in a statement. “Representative Keith Ellison has a proven track record of integrity and fighting for progressive principles.”

Another progressive group that focuses on feminist issues known as Ultraviolet called for the resignation of Sen. Franken.

“Every man who sexually harasses or assaults women must be held accountable, no matter their position or party. Sen. Al Franken should resign.”

If the former Saturday Night Live star were to resign, Minnesota Democratic Gov. Mark Dayton’s replacement appointee would hold the seat until the 2018 election.

The progressives’ choice to replace Franken, while controversial, is not all that surprising. Ellison was considered the front runner for the Democratic National Committee Chair, but lost that position to the slightly less progressive Tom Perez.  Ellison is now the DNC Vice Chairman.

But, Ellison has a sordid relationship with Louis Farrakhan.  Ellison in the past has defended the Nation of Islam, Farrakhan’s group which has made anti-semitic remarks. In fact the relationship with Farrakhan is so strong, prominent Democratic thinkers and donors threatened to cut off ties with the DNC if Ellison became the chair.

This past spring, Dershowitz appeared on Fox News, saying:

Speaking on Fox Business, Dershowitz said there is a divide in the Democratic Party over Jewish issues, particularly the support of Israel, or lack thereof, offered by the Obama administration.

Dershowitz said Ellison’s past praise of Nation of Islam leader Louis Farrakhan is enough to make him and other Jews leave the party.

“It does, and if they now appoint Keith Ellison, who worked with Farrakhan, to be chairman of the DNC you’re going to see a lot of people leave” Dershowitz said. “I’m going to tell you right here on this show and this is news, if they appoint Keith Ellison to be chairman of the Democratic Party, I will resign my membership to the Democratic Party after 50 years of being a loyal Democrat.”

And liberal mega-donor Haim Saban has also condemned Ellison in the past, telling CNN:

“If you go back to his positions, his papers, his speeches, the way he has voted, he is clearly an anti-Semite and anti-Israel individual,” the Israeli-American said Friday about the Minnesota lawmaker. “Words matter and actions matter more. Keith Ellison would be a disaster for the relationship between the Jewish community and the Democratic Party.”

Ellison for his part, claims he has denounced these remarks made by Farrakhan.

“I have long since distanced myself from and rejected the Nation of Islam due to its propagation of bigoted and anti-Semitic ideas and statements, as well as other issues,” Ellison wrote in 2006.

There is little indication that Sen. Al Franken will actually resign.