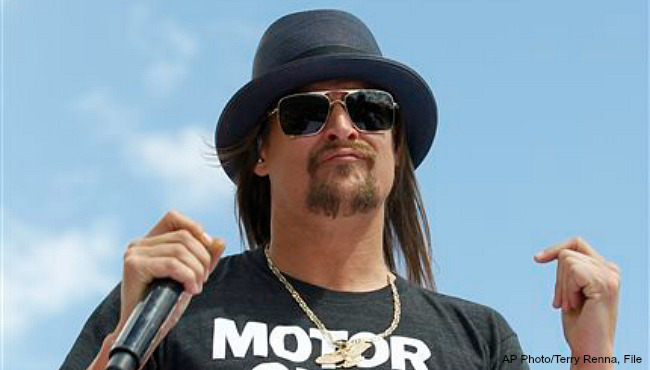 Not only that: “(You) think you have to remind me that black lives matter?”

On Wednesday night, Kid Rock made it abundantly clear that he has no use for racists of any stripe.

In a concert at a high-energy capacity crowd at Van Andel Arena in Detroit, Kid Rock ripped those who “call me a racist ‘cause I’m not (politically correct),” adding that they “think you have to remind me that black lives matter.” That wasn’t all; he snapped, “Nazi f—— bigots and the KKK, screw all you ass—–, stay the f— away.”

Prior to his speech, “Hail to the Chief” was played.

Kid Rock lauded those who acted responsibly but criticized “deadbeat dads” and single moms who “can’t even take care of themselves but keep having kid after … kid.”

At the end of his extemporaneous speech he enthused, “If ‘Kid Rock for Senate’ has got folks in disarray, wait ’til they hear ‘Kid Rock for President of the U.S.A.’!”

Then Kid Rock launched into “You’ve Never Met a Motherf—– Quite Like Me.” He is scheduled to open Detroit’s Little Caesars Arena next week with a six-show run, where the National Action Network’s Detroit chapter has said it plans to picket him.

Slammed by some for his outspoken comments about NFL quarterback Colin Kaepernick, Rock told the audience he won’t retract any criticisms he has delivered.