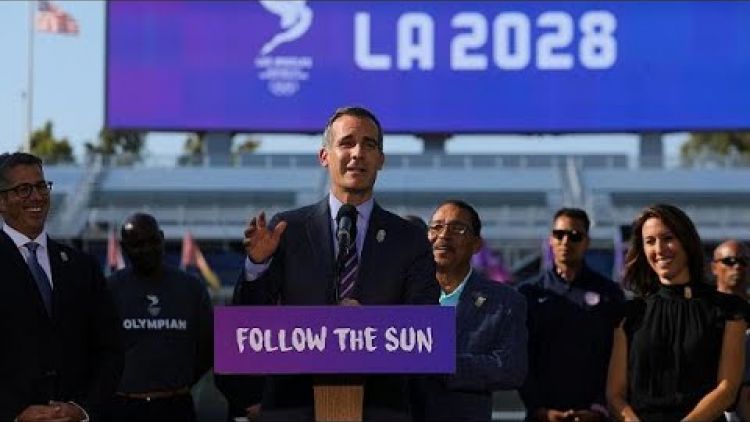 The Los Angeles chapter of the Democratic Socialists of America (DSA-LA) has built an alliance to stop the 2028 Olympic Games from coming to L.A.

Protesters from the NOlympics LA coalition upstaged festivities at Los Angeles City Hall last week, disrupting a press conference after lawmakers had just approved a bid to host the Summer Games. The International Olympic Committee (IOC) is expected to vote in favor of L.A.’s proposal next month — officially bringing the 34th Olympiad to Southern California.

“They wanted it to be a celebration, and I think that we really stamped it out with our feet,” Jonny Coleman, an organizer with NOlympics LA, told The Daily Wire. “We feel like there’s something between a two and a four-year plan to legally intervene and shut this down.”

Coleman, who is also a member of DSA-LA, says there was a remarkable lack of transparency in the bid process, including a budget that won’t be presented until next year. Still, L.A. City Council unanimously agreed to pick up the tab for any unexpected expenses that might result from hosting the Games, which almost always incur significant cost overruns. According to the Associated Press, “the price tag on the 2020 Tokyo Olympics has ballooned to nearly twice the initial estimate, even after a major cost-cutting effort.”

NOlympics LA has expressed concerns that the Games will displace low-income residents, raise housing costs and exacerbate homelessness. The group also points out that the Department of Homeland Security (DHS) designates the Olympics as a National Special Security Event (NSSE), which means federal law enforcement would be in command of the region. That might create problems for unlawfully present immigrants that come to Los Angeles to seek sanctuary, activists say.

According to an analysis compiled by NOlympics LA:

Cautious not to reveal strategy, Coleman assures that “there are all sorts of interventions that are possible.” However, he did mention the 1976 Winter Games as a historical precedent. As NBC News reported, Denver “became the only city in the history of the modern Olympic era to win the Games and then give them up” after a Colorado legislator named Dick Lamm — who would go on to become governor — began to scrutinize the game plan:

Lamm channeled his uneasiness into action, forming a statewide coalition of regular folks turned activists who dubbed themselves Citizens for Colorado’s Future. In short order and with shorter funds they led a successful petition drive to add an amendment to the state’s constitution outlawing the use of state money for the Olympics. …

It wasn’t even close. A whopping 60 percent of the votes were cast in favor of the amendment. Without state funding there could be no federal funding, and without either there could be no Olympic Games in Denver. Developmental, environmental, and financial crises averted.

Since DSA-LA’s Housing and Homelessness Committee launched the NOlympics campaign in May, more than 20 allied groups have joined the cause — including Black Lives Matter-Los Angeles, several socialist organizations, and the National Alumni Association of the Black Panther Party.

“We’ve been operating on a couple of hundred dollars,” Coleman said. “We’re all taking time out of our days, lives and careers to do this.”

DSA-LA’s membership count has increased to around 1,000 comrades since the election of President Donald J. Trump. Often misconstrued as a national political party, DSA is the largest socialist organization in the United States with 19 chapters in California alone. Even if the NOlympics coalition fails to stop the Los Angeles Games, organizers will have 11 years to build a robust army of grassroots activists that are eager to make a statement on the world stage.