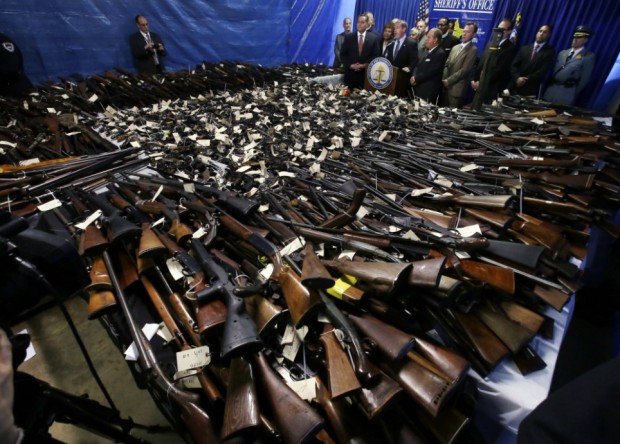 There are numerous problems with gun buyback programs, though most gun control advocates are reluctant to speak about any of them. For one, the whole “no questions asked” policy that infest so many of these make them excellent places to dispose of evidence used in crimes.

However, one lawmaker wants to pay out a whopping 125 percent of the firearm’s value.

Deemed the Safer Neighborhoods Gun Buyback Act, the bill would provide a two-year $360 grant to the U.S. Department of Justice to send out debit cards to gun dealers as well as state and local governments to be used to trade for guns which, in turn, would be destroyed. The bill’s author says the program reduces the number of guns in circulation, thus contributing to public safety.

“Although no one piece of legislation will eliminate all gun violence, this bill will get guns off the streets and keep them out of the hands of people who wish to cause harm,” U.S. Rep. Donald Payne, D-NJ, said in a statement. “If we can get one gun off the street, if we can save one life, then we have to take action.”

Payne’s bill, entered as HR 3613, would use the allocated funds in the pilot program to buy guns for up to 125 percent of their market value. In exchange for the gun — which would be destroyed — the former gun owner would receive a debit card that can be used to buy anything but firearms or ammo. Those violating that stipulation would be liable to repay the funds at twice the value and could pick up as much as two years in prison.

It’s unlikely that Payne sees any potential problems with a bill like this. Not only would this allow for the disposal of evidence and thus make crimes harder to solve—the precise reason Payne’s colleague in the House, Rep. Anthony Brown of Maryland, says we need to microstamp firearms—it will also create a perverse incentive to criminals to potentially steal guns just to trade them in.

No gun buyback scheme will work without some kind of “no questions asked” policy. After all, why would the people you most want to disarm bring in guns for a buyback if there’s a risk of them being arrested? Easy, they wouldn’t.

That could become a double-edged sword, however. If you are going to get 125 percent of its value on a gun, that makes that an even more tempting item to swipe.

Realistically, however, it’s unlikely to make much of a dent in the black market for guns.

High quality guns reportedly go for several times their official value, for one thing. Additionally, there will always be some criminal who want cold, hard cash and they want it now, so they won’t be picky about selling their stolen guns to whoever has it.

It’s easy to understand why liberal politicians want buyback programs. After all, everyone wants guns out of criminals’ hands, and buyback programs do take some guns off the streets. To a point.

What they rarely do is take a gun out of the hands of a criminal who has an intent to use it. Instead, they’re little more than legal evidence disposal schemes that also let liberal gun owners signal their increased virtue by talking about how they got rid of their icky guns.