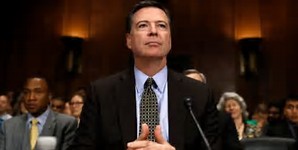 The left has come up with a takeaway from fired FBI Director James Comey’s testimony before the Senate Intelligence Committee last week: The man who was in charge of the “world’s premier security and crime-fighting forces” is a victim of sexual harassment.

It goes like this: Comey’s new boss invites him out to a work dinner; when he arrives, he finds that what he assumed would be a group event has somehow turned into a one-on-one meeting. Comey is disturbed that his new boss calls him so often; whereas his previous supervisor had initiated just two in-person conversations with him in two years, the new one insists on having ‘nine one-on-one conversations’ in four months– ‘three in person and six on the phone.’ Those in-person conversations, like the ‘work dinner’ that wasn’t, have an air of uncomfortable intimacy; before beginning, the boss waits for everyone but Comey to clear the room.

Elle concluded that because Comey wouldn’t go along with his abuser, he was fired.

Dough Porter of the San Diego Free Press said Republicans blame the victim, just as is often the case for rape victims.

“Women who have ever reported rape and/or sexual harassment must have been experiencing a strong sense of deja vu with the pattern of Republican attempts to blame victim/witness Comey,” Porter said.

Porter than cited Robin Abcarian’s column in the Los Angeles Times, which he said, “set the scene perfectly.”

“Is there a working woman alive who cannot identify with poor James Comey right now? The former FBI director’s boss tried to seduce him. When the seduction failed, his boss fired him. And then called him ‘crazy, a real nut job,’” Abcarian wrote.

“The parallels between Mr. Comey’s experiences with President Trump and the facts of a sexual harassment case — I am not the only one to notice them — should perhaps not be that surprising,” a Vox writer opined.

And rather than focusing on how Comey admitted he helped presidential candidate Hillary Clinton by obeying then-Attorney General Loretta Lynch order to downplay the investigation into Clinton’s  mishandling of classified information or how Comey leaked to the press the content of his private conversations with Trump, Vox focused on the “workplace issue.”

Sexual harassment is a workplace issue, one in which a supervisor abuses structural power over a subordinate. Americans tuned in, at least in part, to see if Comey would level allegations of improper use of power by his boss, so there was a sense in which the hearings were already set to cover ground familiar to many of us.

The Washington Post called Comey’s testimony a “performance of a lifetime” that involved playing two roles at once — the “prototypical G-man” and “the aggrieved victim of an undisciplined, line-crossing president.”

“In both roles, the play ends with Comey, the deposed FBI director, in a new and uncomfortable place — as the whistleblower, warning the nation about a president who schemes, lies and seeks to corrupt public servants under the guise of loyalty,” the Post reported.

The Post actually turned to an acting expert to analyze what clearly was the vindication of Trump after months of speculation that he was under investigation for colluding with the Russians during his presidential campaign and practiced obstruction of justice for interfering with the investigation by firing Comey — both confirmed as not true by Comey.

Derek Goldman, a theater director and founder of the Laboratory for Global Performance and Politics at Georgetown University, wrote:

This was an unusually explicit example of someone in public life walking a tightrope between roles. Comey was trying to get across that ‘I’m trustworthy and I acted with integrity, on behalf of the greater good.’ That requires both his ‘aw, shucks’ dignity and a capacity to speak truth to power, to blow the whistle.

Meanwhile, Newsweek called the Comey hearing “Washington’s Super Bowl,” based on the crowds that filled D.C. bars at 9:30 a.m. Thursday to drink and watch it unfold on big screen televisions.

“To many of the women watching, the cross-examination seemed uncomfortably familiar,” Newsweek reported, citing a liberal Hollywood writer.

“Nicole Serratore,  a theater and travel writer, tweeted that it read ‘so weirdly like a date with terrible guy.’

“Her light-hearted tweet was quickly followed by a more serious string of messages. ‘If you substitute sex for loyalty in all these exchanges it’s like a guy who does not understand consent & won’t stop until he gets his way,’ she wrote.”

“On Twitter, several women agreed with Serratore, adding that the committee’s questioning of Comey sounded like the cross-examination of sexual assault survivors,” Newsweek reported. “In response to Democratic Senator Dianne Feinstein’s question: ‘”Why didn’t you stop and say, ‘Mr. President, this is wrong. I cannot discuss this with you’?”