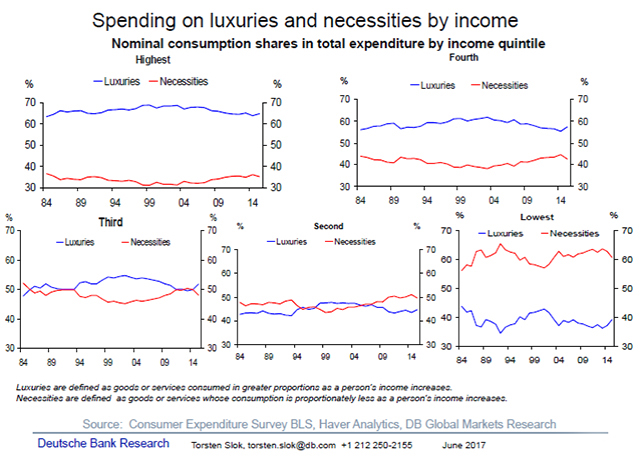 It turns out that all Americans, regardless of income, spend a large percentage of their income on luxuries.

People who make the most money spend the biggest chunk of their incomes on luxury goods, but even the poorest households spend a significant amount for luxuries, according to an analysis released this week by Deutsche Bank Research.

The wealthiest families (the top fifth of earners) spend around 65% of their incomes on luxury goods and 35% on necessities, according to the study, which looked at spending habits between 1984 and 2014. Middle-income households weren’t far behind: They spend 50% on luxuries and 50% on necessities.

Even the lowest income families (the bottom fifth of earners) spend 40% on luxuries and 60% on necessities, according to the study’s author, Torsten Slok, chief international economist for Deutsche Bank Securities.

While we tend to think of spending on luxuries as an indulgence driven by emotions, recent research suggests consumers’ feelings play a key role in spending on necessities as well. “Consumers who experience a loss of control are more likely to buy products that are more functional in nature, such as screwdrivers and dish detergent, because these are typically associated with problem solving, which may enhance people’s sense of control,” the authors of an April 2017 study in the Journal of Consumer Research wrote.

Still, the richer you are, the more likely you are to overspend on unnecessary purchases with your credit card, a January 2017 NerdWallet survey found. Nearly half of Americans (49%) say their emotions have caused them to spend more than they can afford, it concluded.

Most Americans (86%) say it’s OK to go into credit card debt to pay for necessities such as emergency purchases, medical expenses and expenses related to unemployment. But about even more people (87%) said they would be embarrassed to go into debt to pay for unnecessary purchases they can’t afford, non-emergency travel expenses or cash advances, NerdWallet found.

Women are more likely than men to overspend because of stress (35% vs. 24%) while men say excitement leads them to spend too much, the NerdWallet survey found. Households at the bottom of the income ladder (less than $50,0000) are more likely to overspend because of stress than households who make $100,000 or more (34% vs. 24%).