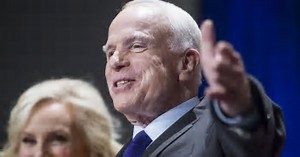 Sen. John McCain (R-Ariz.) is President Trump’s fiercest critic in the GOP and is giving voice to misgivings held by other Republicans more reticent about airing criticism in public.

McCain’s latest stunning public shot was to tell The Guardian that America’s standing in the world was stronger under former President Barack Obama, a man the Arizona senator has torched for a “feckless” foreign policy.

The statement came a month after McCain, his party’s 2008 presidential nominee, strongly criticized Secretary of State Rex Tillerson for downplaying the importance of basing foreign policy decisions on American values.

“With those words, Secretary Tillerson sent a message to oppressed people everywhere: Don’t look to the United States for hope,” McCain warned in a New York Times op-ed.

Also last month, McCain called reports that Trump had shared classified information provided by Israeli intelligence “deeply disturbing” and warned that allies may not share sensitive material in the future.

McCain is rarely afraid to speak his mind, noted John Weaver, a longtime political adviser to the senator.

“I’ve talked to a number of Republican senators who share the same viewpoint and for whatever reason are reluctant to say it,” said Weaver.

McCain’s office and the White House did not comment for this article.

McCain was less critical of Trump last year, when he was running for reelection to the Senate for a sixth term — even after Trump questioned McCain’s status as a Vietnam War hero.

“I like people who weren’t captured,” Trump said in a cutting remark about McCain’s five years of captivity in a North Vietnamese prison.

Since then, McCain, who relished the label of maverick earlier in his career but has aligned himself more closely with the GOP establishment recently, has become a big thorn in Trump’s side.

He praised Comey “as a man of honor and integrity” after Trump fired him and argued that the president’s decision confirmed “the need and urgency” to set up a special congressional committee to investigate Russian influence in the 2016 presidential election.

When Trump later disparaged Comey as a “nut job,” according to press reports, McCain said he was “almost speechless.”

In May, he said the controversy could become a full-blown scandal, observing, “It’s reaching the point where it’s of Watergate size and scale.”

On the policy front, McCain last month cast a surprise vote to kill a resolution Trump favored that would have overturned an Obama-era rule on methane emissions.

Unlike GOP Sens. Lindsey Graham (S.C.) and Susan Collins (Maine), who announced their positions prior to opposing the resolution, McCain did not give a public warning, prompting speculation that he wanted to warn Trump over the Comey firing.

McCain is one of the few Republican figures in the country who are as well known as Trump.

He is also 80 years old, a fact repeatedly brought up after he stumbled with his questioning of Comey last week during a highly anticipated Senate Intelligence Committee hearing.

But the way McCain sought to communicate his arguments confused Comey, members of the panel and much of the television audience, leading to questions about his stamina.

McCain acknowledged he could have been better, joking in a statement that he had been up late watching a baseball game the night before.

Other Republicans have hinted at similar concerns to McCain’s on Trump but have muted their criticism.

Senate Foreign Relations Committee Chairman Bob Corker (R-Tenn.) appeared stunned last week when he learned Trump had accused Qatar, which hosts the largest U.S. military base in the Middle East, of being a state sponsor of terrorism.

“The president?” Corker asked reporters, looking shocked as one journalist showed him Trump’s comments made earlier that day on Twitter.

But Corker did not directly criticize Trump’s remarks.

Other Republicans have pushed back on Trump’s foreign policy moves, albeit with less force than McCain.

In February, Sen. Cory Gardner (R-Colo.) sent a letter to Trump urging him to take a tougher line with Russia.

He urged the administration to take “diplomatic actions” and impose “economic consequences” in response to Russian cyberattacks against the United States and other Western democracies.

Republican lawmakers led by Senate Majority Leader Mitch McConnell (Ky.) broke with Trump in February after the president suggested a moral equivalency between Russia and the United States on human rights.

When asked about allegations that Putin is “a killer,” Trump told Fox News’s Bill O’Reilly: “You think our country’s so innocent?”
McConnell shot down that notion right away.

“I don’t think there’s any equivalency,” McConnell said the day after Trump’s comments were published.

“America is exceptional,” he added. “There’s a clear distinction here.

“I obviously don’t see this issue the same way as he does.”
McCain has at times sought to counter Trump’s influence on the world stage.

In February, he called the Australian ambassador to reassure him about his country’s alliance with the United States after a tense phone call between Trump and Australian Prime Minister Malcolm Turnbull.

Trump gave Turnbull a tongue lashing over a deal to transfer more than 1,000 refugees to the United States, accusing him of wanting to send the “next Boston bombers” across the Pacific.

“He’s all but said the same thing on his trips to the Munich defense conference and to Asia,” Weaver said. “I know he’s very concerned about America advocating its position in the world on trade and security issues.”