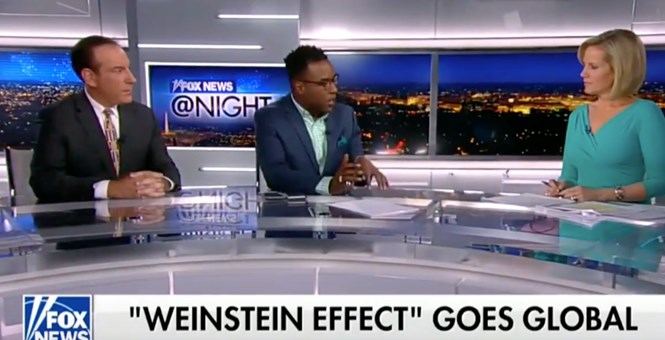 Last week, Mediaite’s Larry O’Connor, who also used to write for our sister site Hot Air,  and Fox News contributor Richard Fowler discussed the so-called “Weinstein Effect” with host Shannon Bream. We’ve heard the numerous and rather stomach churning stories of sexual abuse and harassment ever since women started to come forward about fallen Hollywood mogul Harvey Weinstein. Now, it’s spreading to other industries in the country. We’ve had liberal media figures, other Hollywood producers, and even a Pixar executive either losing their jobs or facing such a possibility for their bad behavior. Of course, no one is for sexual harassment; creeps have to go. Period.

Yet, there is a gross hypocrisy here, which O’Connor aptly noted. He did agree with Fowler’s points about teaching boys from a young age on how to treat and respect women, but added that it’s a bit interesting to see Democrats’ reaction to this, given that they tolerated Bill Clinton’s past sexual abuse allegations. So, if we really want to talk about fighting the kind of culture that allowed these horrible people to operate for so long, the Left might want to come to terms with how they behaved during the Clinton presidency. He added that Democrats had a “powerful influence” on our society by giving Bill a pass on his rape allegations (via Mediaite):

“You worry about a rape culture in America,” O’Connor elaborated. “Juanita Broaddrick was ignored, ridiculed, demeaned and absolutely trashed by the party elites, by [Hillary] Clinton, by the way, for the last 20 years. And just now suddenly Democrats are seeing religion on this.”

But before Shannon Bream closed the segment, O’Connor reiterated the impact that was made when Clinton got a “pass” for his sexual assault allegations. Fowler pushed back, pointing to Clinton’s impeachment.

“He didn’t get impeached over the Juanita Broaddrick case and that was a sexual assault,” O’Connor rebuffed. “And I think that had a powerful influence on our culture.”

Granted, some on the Left have done that—albeit more than two decades after the allegations were bright forward against the former president. Even now, we have people downplaying Franken’s accusations, saying he’s a comedian etc., with others saying Rep. John Conyers (D-MI), another Democrat accused of sexual misconduct, and his allegations could be made up. There’s a circling of the wagons, maybe not as fast at assembling as Clinton, but there’s vestiges nonetheless.

O’Connor also said that this sexual misconduct reckoning that is sweeping the world is tempered by the fact that it’s mostly Western, predominately Judeo-Christian, nations being swept up in it; the Muslim world, which has an appalling record on women’s rights, is (obviously) nowhere on this.

Fowler said that Bill was held to account since articles of impeachment were brought before him, while O’Connor noted that he wasn’t impeached for the Juanita Broaddrick allegation.