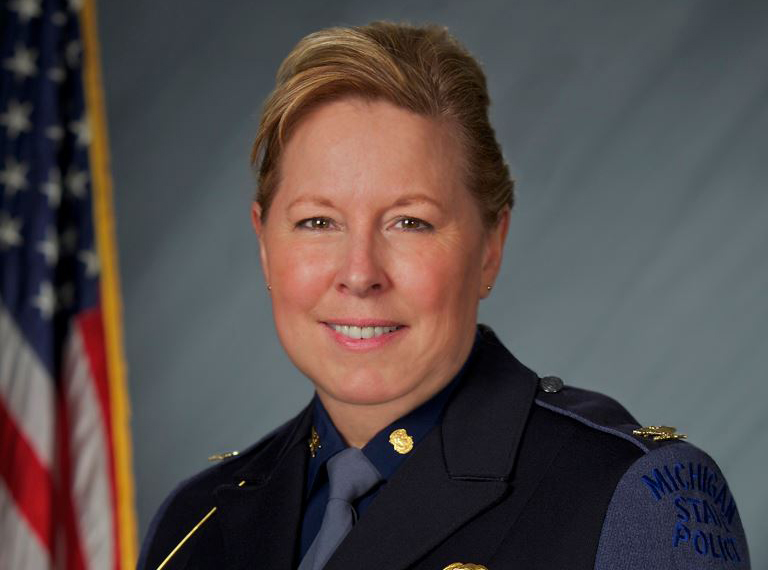 The director of the Michigan State Police shared a meme only to become one.

After the Breitbart News Facebook page posted the message on September 24, the Huffington Post noted that conservative news site had “published the top post on the social network by any major American publisher” that weekend. It boasted a greater reach than any such post in the news site’s history. The simple white text on a black background generated more than 250,000 likes, 18,000 comments, and 600,000 shares. Colonel Etue reposted the meme the day it went live.

Those defending the right of NFL players to express themselves on the job showed little tolerance for the top cop offering her opinion on her own time.

Kenneth Reed of the Detroit Coalition Against Police Brutality called the punishment meted out by the Republican governor “not good enough.” He wants Etue fired. Michigan Legislative Black Caucus Chairman Sheldon Neeley also called for her dismissal. “This calls into question her ability and objectivity to lead the men and women in her department who are charged with not just enforcing laws, but also protecting and serving all communities, regardless of race or ethnicity,” he maintained. Michigan ACLU executive director Kary Moss demanded Etue’s resignation because in reposting a message she demonstrated “a complete disregard for these constitutional principles and the highly relevant concerns of athletes who are protesting.”

Whereas Etue reportedly earns somewhere in the neighborhood of $160,000 a year, Colin Kaepernick, the first of the NFL players to refuse to stand for the “Star Spangled Banner,” generated about 100 times that income last season without facing a fine or a suspension because of his behavior.

The free-speech-for-me-but-not-for-thee incident involving social media marks the latest, but undoubtedly not the last, instance of repression following expression and of an individual sharing a viral message only to herself go viral.

“Dear NFL,” reads the meme, which featured no ironic or funny photo but just text, shared by Etue. “We will not support millionaire ingrates who hate America and disrespect our Armed Forces and Veterans. Who wins a football game has zero impact on our lives. Who fights for and defends our nation has every impact on our lives. We stand with the heroes, not a bunch of rich, entitled, arrogant, ungrateful, anti-American degenerates.”