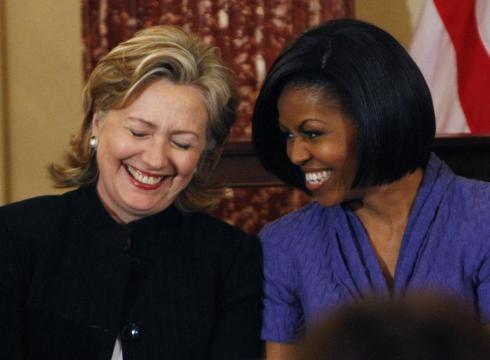 I didn’t like liberal women when I was a child, when I was a teen, or when I was a young woman, and now, as a middle-aged woman with adult children, I have grown to detest them more than anything. I’ll tell you why.

Liberal women are a dime a dozen, so it doesn’t matter that the specific liberal women who set me off today are among the nation’s first ladies. I have zero respect for either of them or anything they represent.

In the past few days, Hillary Clinton and Michelle Obama have decided to tell me, as a grown woman, that I disrespect myself and have voted against my “voice” because I didn’t vote for President Canker Sore’s wife and voted for Trump instead.

Hillary said that women who continued to support Trump after his sexist comments “publicly disrespected themselves.”

“When I see women doing that, I think why are they publicly disrespecting themselves? Why are they opening the door to have someone say that about them in their workplace? In a community setting? Do they not see the connection there?” Clinton said in an interview on AM Joy.

Obviously, from a woman who set the standard for publicly disrespecting herself by defending her possible rapist and certainly repeated adulterer husband, the comment is laughable on its face. But let’s cut the crap. I’m not on this planet to look out for every woman. It’s not my job to stand in solidarity with other women, no matter what. It’s my job to protect my family and my country, and Hillary has proven she can’t do either. I protected my family from her corruption and mental disease by voting for Trump.

Michelle Obama complained that women who voted against Hillary “voted against their own voice.” She said that women have been socialized to be silent while men speak, even when they say outrageous things.

I don’t know where Michelle grew up, but it’s been my experience that men shut up and listen when I speak, because I have interesting and important things to say. Good men respect independent women, so when people like Michelle complain that women just don’t know how to speak up, it’s especially galling because it’s simply not true. It’s a cop-out and an insult. It has also been my experience that liberal men are more likely to be rude or condescending, so perhaps the type of men Michelle chooses to be around are the reason she has a distorted view.

Many women did speak up against the type of speech Trump used, but we realize men aren’t women, no matter how hard liberal women try to make men be liberal women. We also know there are some women out there who definitely would allow a man to grab them by their privates if the men were rich and powerful. That’s what Trump said, and it’s true. Some men would go for that, and some wouldn’t. Independent women took into account what Trump said, and what Hillary is, and voted for Trump. That’s a reflection on just how terrible Hillary is, with all she represents. Women with brains weighed their options and made their choice.

And who is so stupid as to believe that I’m supposed to vote for a woman because I’m a woman? I’m supposed to become some silly-minded groupie because a woman is seeking office? I’ll vote for the right-minded, independent woman, because that represents me. Not some phony gender-obsessed aggrieved witch who barks at men just because they’re men and believes she is superior because she believes liberal lies.

Liberal women seek glorification, not because they are intelligent but because they seek approval from other liberal women. Their neediness to fit in the mold that other screechy women have made for them is complete — and completely degrading. Their false sense of superiority is a defense mechanism for their lack of intellect. Their militant belief that all women ought to be in solidarity is due to the fact that they haven’t the strength to stand on their own. Their rejection of their own biology is the result of their own feebleness and instability. Their hunt for equality is a ploy for unearned privilege. Their emphasis on “reproductive rights” is submission to, and proliferation of, irresponsible and gutless men.

Thousands of liberal women with pussy hats on, and not one of them asked another the question, “Could these hats symbolize our intellectual restrictions and focus the male mind on what we come equipped with for their pleasure, reinforcing the troglodyte stereotype that women are ditzy whores?” Not one.

Some ridiculous liberal wimp on Twitter tweeted the day of the election, “May the election of Trump bring forth the fiercest, smartest, toughest generation of ass-kicking women this country could possibly imagine.” My response? “We’re right here; be careful what you wish for.”

Women who know themselves won’t get in line and yield to the desecration of what being a woman truly is by the weak, gullible, and ignorant liberal women of this world. The independent, free women of America will not be submissive to liberal lies.