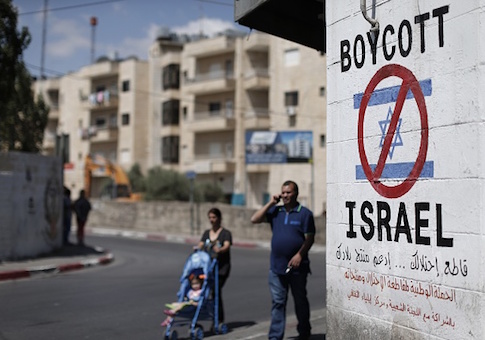 The Democratic Socialists of America and Young Democratic Socialists, the DSA’s student arm, voiced their support for the campaign to cut Israel off from the international economic, cultural, and academic community, as part of their three-day conference held over the weekend at the University of Illinois—Chicago.

Support for the measure was so widespread that no formal tally of the voting cards raised in favor of the motion was necessary.

According to footage posted on Twitter, the vote was followed by attendees waving a Palestinian flag and chanting, “From the river to the sea, Palestine will be free,” a slogan that encapsulates activists’ desire to see the Jewish State wholly replaced by a Palestinian one that would fill the borders of the Jordan River to the Mediterranean Sea.

This was the first time the groups have voted to officially align themselves with the BDS movement, though in January DSA issued a statement in support of boycott measures.

“DSA reiterates its belief that only a unilateral Israeli end to the occupation would enable the Palestinian and Jewish peoples to share the land of historic Palestine in a manner to be determined by negotiations between democratic representatives of both parties, free of external interference. Thus, DSA believes the United States government must break with its implicit support of the settlements by ending all forms of military assistance to Israel that aids the inhumane occupation,” the organization’s National Political Committee wrote. “We also join with the European Union and most progressive religious organizations in the United States in supporting a boycott of goods and services produced by Israeli and foreign corporations in the occupied territories and for divestment from companies such as Caterpillar and Motorola that economically benefit from the occupation.”

Those comments followed a United Nations Security Council vote condemning all construction of Jewish homes in the West Bank and eastern Jerusalem as a “flagrant violation of international law.”

YDS made clear in July that it agrees with the DSA position, when it responded to the introduction in the U.S. Senate of the “Israel Anti-Boycott Act,” which would prohibit “any U.S. person engaged in interstate or foreign commerce from supporting … any boycott fostered or imposed by any international governmental organization against Israel.” YDS claimed the bill would result in “widespread suppression of human rights activism in support of Palestine … something that is present on our campuses and in politics at-large.”

Also at the conference, Jewish Wesleyan student Michelle Fisher was voted in as co-chair of YDS. Fisher previously worked as a “communications volunteer” at the national convention of Hadassah, the Women’s Zionist Organization of America.

Fisher did not respond to an inquiry about her personal stance on BDS.

Nearly 1,000 DSA members attended the conference, and the organization says it has some 25,000 members across the country. YDS claims it has tripled in size over the last year, growing from 15 to almost 50 chapters in 27 states.