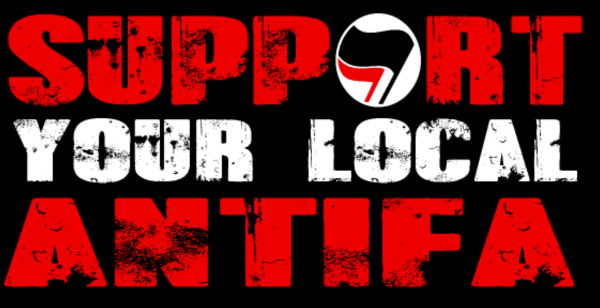 Dartmouth professor Mark Bray is sort of the “public face” of the Antifa movement; he’s the guy that does all the high-profile interviews, and tries to defend sucker punching defenseless people in the name of anti-fascism to cable news talking heads and Very Serious Journalists who want to know why Antifa insists on being so gosh darned violent.

Now, he’s written a book, Antifa: The Anti-Fascist Handbook, in an effort to make mainstream leftists take Antifa – and its call to violence – more seriously, according to the Daily Beast.

Bray is an old school Antifa fanboy, having been part of Occupy Wall Street and, it seems, “Antifa-tyle” actions before that. In order to set the stage for his argument – that moderate Democrats should move aside and allow Antifa to blaze the trail into a true and lasting peace by throwing rocks and cops and setting garbage cans on fire – he delves into Antifa’s long and storied history, of what he considers mostly wins, but what are really Bray taking credit for more widespread movements throughout history or deliberately misrepresenting victims.

[Bray] writes glowingly of “the most iconic moment of [Inauguration] day… when a limousine was set ablaze.” Bray neglects to mention the immolated limousine was occupied by a Latino driver who suffered minor injuries in the attack, and the vehicle was owned by a Muslim immigrant, who asserts he was later harassed by individuals who mistook him for a Trump supporter.

The wins mostly…aren’t. And Bray has a hard time, as Antifa does, defining who, exactly, the “fascists” they’re targeting are. But if Bray’s bizarre, made up history of Antifa teaches him anything, it’s that it’s time politicians and activists step aside and let Antifa handle things. With rocks, locks, and fists.

Bray shares the group’s illiberal view of civil liberties and supports its goal of a “revolutionary socialist alternative… to a world of crisis, poverty, famine, and war that breeds fascist reaction” which they believe would create a crime and prison-free “classless society.”

That’s unlikely, of course. But luckily, since Antifa’s tactics aren’t particularly revolutionary or successful themselves, they’ll probably never have to worry about what to do if they ever win. But that doesn’t stop Bray from taking credit for everything, or suggesting that Antifa’s tactics are the only way liberals can win their way through the culture wars.

Bray never explicitly accuses President Trump of being a fascist, but he argues that the alt-right’s influence on Trump further justifies antifa action, and as a revolutionary socialist group, Bray notes antifa could not be bothered with the lamentations of mainstream Democrats who worry the group could provoke an electoral backlash.

In other words, if you refuse to believe Antifa is force for good in the world, well, you’re just as much a fascist as anyone – and a wimp to boot.

The problem for Bray is pretty simple: his book comes perhaps just weeks after support for “Antifa” was at an all time high. Since the clash at Charlottesville, where peaceful protesters defining themselves as “anti-Fascists” clashed with real neo-Nazis (a success for the anti-fascist movement, overall), most Antifa follow-up actions have been nothing more than massive swarms of black-clad college dropouts and hapless mid-30s pizza chain employees, beating up on anyone who comes into view, real Nazi or not.