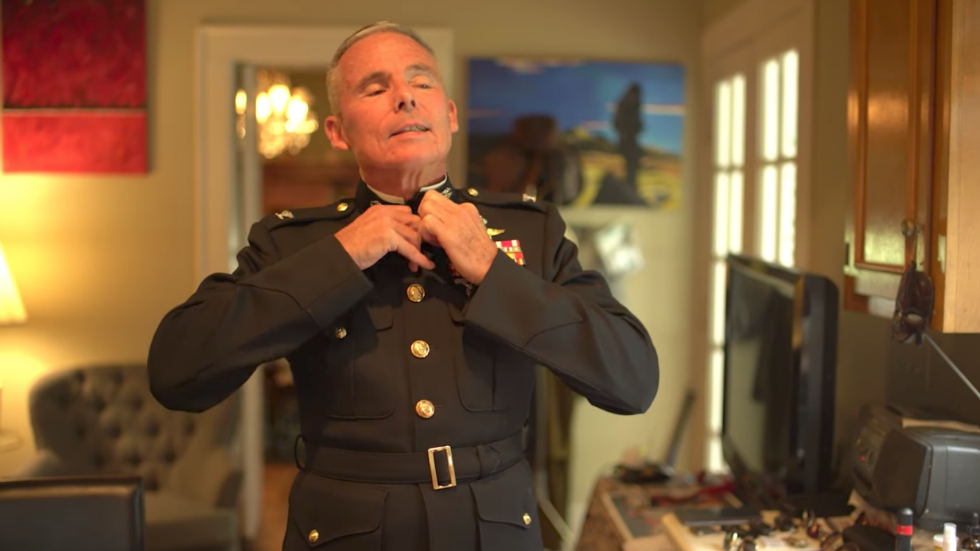 On Monday, only 15 days before the election in Alabama to fill the vacated Senate seat, a new candidate entered the race as a write-in candidate: retired Marine Col. Lee Busby.

Busby, who served in the Marine Corps for 31 years and whose last tour of duty saw him serve as vice-chief of staff to General John Kelly, the current White House chief of staff, when Kelly was a three-star lieutenant general commanding the Marine Forces Reserve, told The Daily Beast: “Alabama is not happy with the two choices we have down here. They are not appealing.” The Washington Post reported Busby said, “I think you can flip this thing. If this were a military operation, the left flank and the right flank are heavily guarded. I think that gives you an opportunity to run straight up the middle … I just don’t believe that either one of them are qualified to be in the U.S. Senate.”

Busby was referring to Judge Roy Moore, the GOP candidate who has been accused by at least six women of preying on them while they were teenagers, and Doug Jones, who is staunchly pro-abortion and is the Democratic candidate for the seat. Speaking of Moore, Busby stated, “I have no idea if the allegations against him true or not, but I don’t see anything within his experience as a judge that qualifies him for the job.” He added of the allegations against Moore,, “It has created enough distaste in my mind. As a voter, I don’t need to get to the bottom of it.” He commented of Jones, “The people of Alabama are not going to be represented by someone who supports a liberal abortion policy. I’m extremely concerned about the Democratic Party in Alabama. I don’t think they reflect Alabama’s views.”

Moore would have been a shoo-in in heavily Republican Alabama, but the allegations against him, which he has denied, have sunk his standings in the polls until they are now showing a neck-and neck race between him and Jones.

President Trump has stated that Jones must be defeated, implicitly supporting Moore’s candidacy. He tweeted on Sunday:

The last thing we need in Alabama and the U.S. Senate is a Schumer/Pelosi puppet who is WEAK on Crime, WEAK on the Border, Bad for our Military and our great Vets, Bad for our 2nd Amendment, AND WANTS TO RAISES TAXES TO THE SKY. Jones would be a disaster!

But the White House said Trump would not campaign for Moore.

Busby has spoken to Southern Living about his passion after he retired in 2013 for sculpting military members from Alabama who were killed in Iraq and Afghanistan. He said, “In the military we say a warrior dies twice. The first time is when he draws his last breath. The second time is when somebody speaks his name for the last time. You know how when you do something that touches you, you know it. I’m not Michelangelo. But I know the world that these people were operating in. I know what they went through and I do have some ability to score. So, that’s what I wanna do.”

Busby asked the soldiers’ parents for their permission. He said:

It’s very difficult for them, more difficult than I can imagine. You know … most of these young people were killed in 04, 05, 06, 07 so when you go to talk to somebody about that, you know, they’ve put the worst of the pain away, and they dealt with it, and now you ask them, “I want you to sit down with me, and let’s recreate a likeness of your son.” That’s emotionally tough stuff. I think what motivates them to incur that pain, it’s very simply wanting their son or husband remembered. And I think it takes a lot of emotional bravery and courage to do it. In the doing of it, I’m pretty sure I saw some healing too. When you see a smile spread across the face, when you get it, when that likeness starts to come together, and you know boom, okay, that’s him.

If he is elected, Jones would be the first Democrat elected U.S. Senator from Alabama in roughly 25 years.