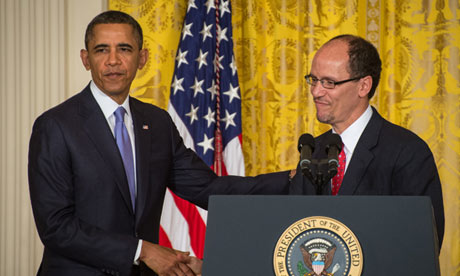 A whistleblower is making some of the same complaints against the Obama administration over its record of providing congressionally mandated payouts to nuclear workers as Barack Obama did about the George W. Bush administration’s.

Obama, when he was a senator in the middle of his White House bid, admonished the Bush Labor Department over complaints of bureaucratic bungling and intentional efforts to deny or drag out payouts to workers who lost their health building the nation’s Cold War nuclear arsenal.

“There is no question that when it comes to this program, this administration has been more than willing to ignore the law when it disagrees with Congress’ intent,” Obama, who repeatedly tried to advocate on behalf of sick workers in his home state of Illinois, told the Rocky Mountain News in 2008.

“It must be remembered that these laws were passed by a Republican majority in Congress,” Obama continued. “While many workers or their families have been compensated, there is no doubt that what Congress intended when it created this program simply has not materialized, and as a result, many deserving workers have been left out by the current legislation.”

Obama went on to say in the interview that he found it “deeply troubling” that the Bush administration would “assume that these workers are lying about their work conditions and their illnesses.”

“The great irony of the situation is that this program was created because the government misled these workers for so many years” about the toxicity of work conditions at nuclear weapons facilities.

The program, which Congress created in 2000 and the Bush administration had the job of implementing, had a rough early history.

Beset by administrative cost run-ups while compensating a paltry number of workers in its first years, lawmakers in 2004 moved the program, the Energy Employees Occupational Illness Compensation Program, from the Energy Department to the Labor Department and installed an ombudsman to oversee complaints and report them to Congress.

Compensation awards sharply increased, but complaints persisted that Labor officials were narrowly interpreting the law to deliberately deny awards to workers who Congress intended to cover or dragging out the process until workers simply died. A bipartisan group of critics on Capitol Hill held a series of hearings and pressed the Bush administration to make changes to ensure the program was more claimant-friendly.

After Obama was elected president, Democrats predicted the incoming Obama administration would be a lot more “sympathetic” to the plight of the nuclear workers and help make the program more responsive with faster compensation awards.

Sen. Mark Udall (D., Colo.), one of the program’s top champions along with Sen. Lamar Alexander (R., Tenn.), said in January 2009 he had met with Hilda Solis, Obama’s choice for his first Labor secretary, and had put the problems with the compensation program “at the top of my list” of discussion items.

“I believe this administration will be a lot more sympathetic to these Cold War warriors,” Udall said at the time.

Nine years later, an internal Labor Department whistleblower is voicing many of the same complaints against the Obama administration and its record of administering the compensation program for nuclear workers and their survivors.

Stephen Silbiger, a senior attorney at the Labor Department, told the Washington Free Beacon that Labor Secretary Tom Perez ignored years of his complaints about the open “hostility” he said some officials exhibited toward claimants, many of whom are too poor and sick to fight the agency’s denials and red tape in federal court.

Additionally, he and other critics have said government officials are often purposely thwarting workers’ attempts to seek the compensation by writing regulations that made qualification much more stringent to than Congress intended, failing to disclose the application rules, changing eligibility rules midstream, and delaying compensation for years until the sick workers died.

Silbiger takes exception to Perez’s argument earlier this year that Republicans are repealing Obamacare because they don’t “give a shit about people.”

In fact, he says that quip contradicts what he saw at the Labor Department during Perez’s and Solis’s time running the agency.

Silbiger, an attorney in the Labor Department’s Solicitor’s Office, said another department lawyer seemed intent on denying some claimants their benefits and narrowly interpreting the statute governing the program to do so. On several occasions during staff meetings over the last several years, Silbiger said an attorney in the Solicitor’s Office expressed disdain for some claimants and said he hoped they would never receive their benefits.

He also cited a ruling by a federal judge in New Mexico last year that overturned a Labor Department’s denial of compensation to a nuclear worker’s widow as proof that the attorneys were narrowly interpreting the law in order to deny awards.