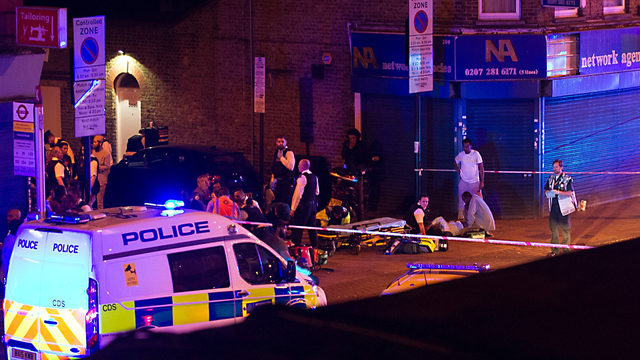 London police are investigating a suspected terror attack and have arrested a 48 year old on suspicion of attempted murder after a van was driven into a crowd of people on a London street near a mosque in Finsbury Park. Eyewitnesses have said the man got out of the vehicle and shouted “I want to kill all Muslims”.

One died during the attack and 10 were injured, but it is unclear whether the death was caused directly by the van ploughing into the crowd. Police said in a statement overnight that all the victims of the attack were from the Muslim faith.

Commissioner of the Metropolitan Police Cressida Dick said in a statement Monday morning:

London has woken up to the news of another appalling attack on our city.

My thoughts are with the family of the man who has died and with all those who were injured.

My officers were on the scene almost immediately, and other uniformed and specialist officers quickly arrived to support them. They worked quickly with colleagues from the other emergency services to treat the injured.

I want to thank all those members of the public who assisted police and emergency services in our task.

There is now an ongoing investigation by our Counter Terrorism Command to establish why this attack was carried out.

London is a city of many faiths and many nationalities. An attack on one community is an attack on all of us.

Terrorists will not succeed in their attempts to divide us and make us live in fear.”

Extra officers are on duty in the area to help reassure the local community. They will be there for as long as they are needed.

Communities will see additional officers patrolling across the city and at Muslim places of worship. We are working as hard as we can to protect all our communities, and we will not be defeated.

In a separate statement, police said the attack happened while a man was already “receiving first aid from the public at the scene”, and that this was the individual who had died. Because it was unclear whether the man had already died before the attack took place, police said “Any causative link between his death and the attack will form part of our investigation.It is too early to state if his death was as a result of the attack”.

“No matter what the motivation proves to be, and we are keeping an open mind, this is being treated as a terrorist attack and the Counter Terrorism Command is investigating.”

Speaking to Sky News Monday, Miqdaad Versi, assistant secretary-general of the Muslim Council of Britain described the moments leading up to the attack. He said: “This was a group of individuals who were praying at the Muslim Welfare House. They were just coming back from prayers and one individual happened to collapse on the floor, and people who wanted to help that individual came around him to support him, and at that moment in time that’s when the van mounted the curb and attacked that whole group, and resulted in that one injury that we’re aware of.”

Previous reports that there had been multiple individuals in the van, and that the driver was carrying a knife have not been confirmed by police Monday morning.

The Finsbury Park Mosque outside which the attack took place had just let out after Taraweeh — special, hour-long Ramadan prayers.

Prime Minister Theresa May has described the attack as a “terrible incident”, while Labour leader Jeremy Corbyn has said he is “shocked” by the “awful event”.

The Muslim Council of Britain (MCB) said in a statement: “We should make clear that if this attack is confirmed as a deliberate terrorist attack then this should be classed as an act of terrorism.

“The British Muslim community requires all decent people to stand with us against this evil violence.

“Rampant Islamaphobia [sic] has been on the rise for a number of years and those on the far right have perpetuated hatred against Muslims. They should be called out for their hatred.

“The days ahead will be difficult, but with unity and tolerance we will prevail. We will not allow these far right extremists to divide our diverse communities.

“Enough is enough, my condolences and prayers for all the victims and their families. They are in my prayers.”

The salafist Finsbury Park mosque has previously been in the news as having been the home of famed hate preacher Abu Hamza Al Masri, as well as having 9/11 attacker Zacarias Moussaoui and shoe bomber Richard Reid as attendees.

In recent years the mosque has changed its management team and has not been mentioned in connection with any recent terror plots.

London Ambulance Service Deputy Director of Operations, Kevin Bate said: “We were called at 12.15am to reports of a road traffic collision at Seven Sisters Road.

“We have sent a number of ambulance crews, advance paramedics and specialist responses teams to the scene. An advance trauma team from London’s Air Ambulance has also been dispatched by car.

“We are working closely with other members of the emergency services at the scene.

“Our priority is to assess the level and nature of injuries and ensure those in the most need are treated first and taken to hospital.