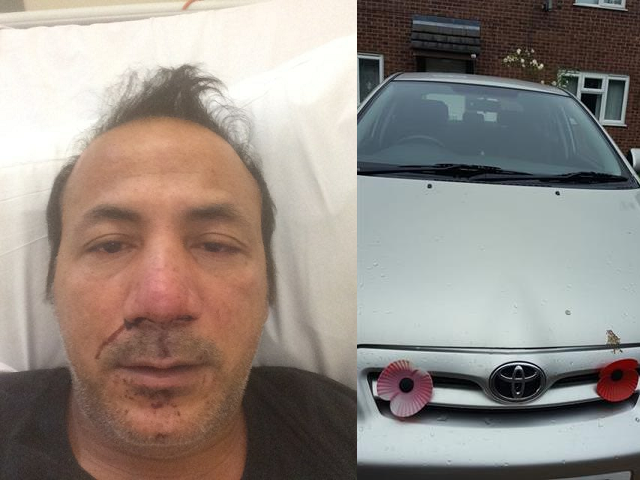 A Pakistani Christian who said he was beaten unconscious by Muslims angered at poppies and a cross displayed in his car has warned that Islamic intolerance is on the rise in Britain.

Tajamal Amar, who fled Pakistan after Muslims there shot him for refusing to convert to Islam, suffered a broken nose and lacerations to the head and body when he was assaulted outside a fast food outlet in Derbyshire on October 20th.

Reporting that he and his wife are “shunned” by the local community for their faith, the 46-year-old said the attack was triggered after Muslims took objection to a display of two large poppies and a cross in his car.

“Several times, local Pakistani people in Derby have taken offence from the fact that I am Christian,” he told the Daily Mail.

“On the day of my attack, the visible display of a cross in my car and two poppies just below the front bonnet triggered the violence against me.

“I know this, because for a few days before the attack the same men, glared at me after they noticed my Christian paraphernalia,” he added.

Following the assault, Mr. Amar said he no longer feels safe in Derby, where he warned that the “hard-line approach” to religion seen among some Muslims is “very dangerous for our society”.

“I fled from Pakistan to escape violence such as this, but more and more the same violence is coming into Britain.

“Freedom of religion should be the right of any British citizen but today I feel unsafe, even then nothing will stop me going to church,” he said.

A spokesman for Derbyshire Police said: “We were called to a report of an assault outside the Red Chilli restaurant, in Littleover, at around 8:45pm.

“He was hospitalised at the Royal Derby Hospital with a broken nose and we have not yet arrested anyone in connection with the assault.”

Wilson Chowdhry, Chairman of the British Pakistani Christian Association, said: “This unprovoked attack on a Christian for simply displaying a cross and two large poppies is an example of the religious intolerance that some strands of radical Islam promote in Britain.”

Breitbart London previously reported on father-of-two Faisal Bashir, who called on police to do more to tackle hatred coming from Muslim communities after he was driven from his home by a campaign of harassment after he left Islam.

However, while authorities have driven “hate crime” to the top of the agenda in recent months, police have been accused of reluctance to act when the perpetrator is from a minority ethnic group.

In addition, recent campaigns and initiatives against “hate crime” taking place across the country have been run in partnership with discredited “anti-Islamophobia” organisation Tell MAMA, with Transport for London and police having visited mosques across the city, encouraging Muslims to report “perceived” so-called “hate crimes”.