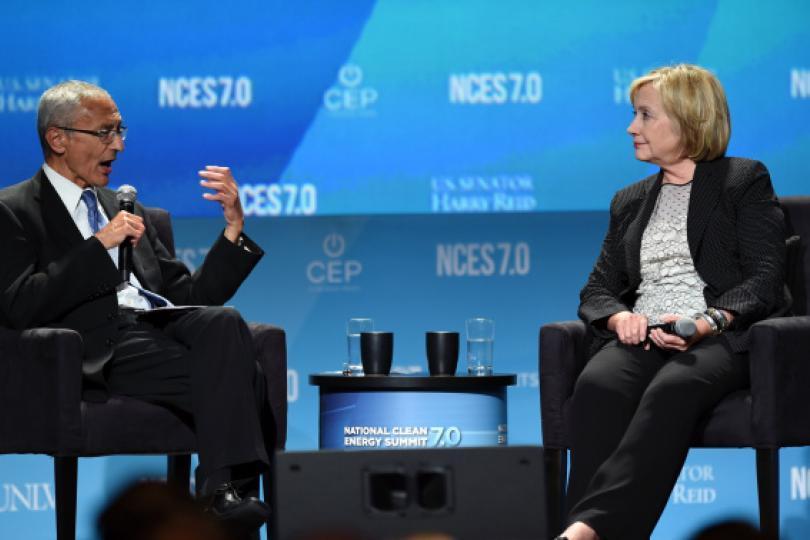 Podesta’s email account was hacked, as was the Democratic National Committee’s. Many of those emails were then leaked, producing a steady, negative and sometimes embarrassing stream of news about Clinton’s campaign. But the Democrats didn’t cooperate fully with U.S. investigators.

“The president and the entire administration were dealing with an unprecedented incidence of the weaponization” of Russian cyberactivity, Podesta told reporters after emerging from the hearing room. He said they were dealing with the attacks as best as they could “on behalf of the American people.”

Asked if he’d be coming back before the House or Senate intelligence committees, Podesta said, “Hope not.” He wouldn’t answer when asked if the committee pressed him about the Obama administration’s response to the hacking.

But even Democrats said beforehand that they had some tough questions planned for him.

“I think it’s fair to ask him: What was the campaign’s and administration’s response” to the hacking, said Representative Jim Himes, a Connecticut Democrat on the Intelligence panel, which is looking into Russian interference in the election.

Representative Adam Schiff of California, the top Democrat on the panel, has gone further: He has said said the Obama administration should have done more to counter Russian interference, and done so earlier.

Panel members declined to comment after meeting with Podesta.

Trump on Saturday tweeted in response to a Washington Post story Friday that detailed the Obama administration’s slow deliberations over whether and how to disclose its finding last year that Russia was trying to sway the election.

“Since the Obama Administration was told way before the 2016 Election that the Russians were meddling, why no action? Focus on them, not T!” the president tweeted.

In a hearing last week, former Homeland Security Secretary Jeh Johnson told the House Intelligence Committee that it wasn’t until Oct. 7 that he co-authored an administration statement regarding the Russian intrusions.

Schiff complained that was two months after he and Democratic Senator Dianne Feinstein of California had written to Obama urging public release of findings related to the DNC hack — and a month after the lawmakers had released their own statement attributing the hack to Russia and senior levels at the Kremlin.

“We were were concerned by making a statement might be, in and of itself, might be challenging the integrity of the election process,” Johnson said.

Committee Republican Trey Gowdy of South Carolina asked Johnson about the DNC’s decision not to turn over its email server to law enforcement or intelligence agencies, saying, “Maybe we would have known more and maybe there would have been more for you to report.”

Schiff followed up: “You’re not somehow saying that justifies the Russian hacking?” he asked Johnson.

Added Schiff, “There is a tendency to blame the victim. The DNC was a victim, was it not?”