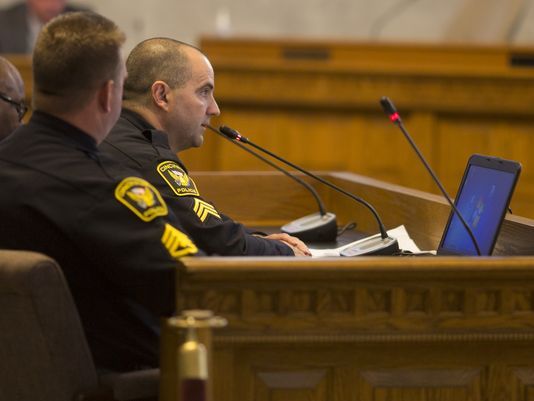 Hours before a mob of Black Lives Matter agitators took to the streets on Saturday to protest the death of Sam DuBose – a black man killed by a University of Cincinnati officer two years ago – Hils attempted to provide some perspective.

In a Facebook post addressed to “Black Lives Matter Protesters,” Hils wrote that “I have the list of the homicide victims in the city of Cincinnati in 2017. As of July 17th, there have been 39 homicides. Of those homicides, 32 of the 39 victims were black.”

Hils listed the names and dates of all the black residents murdered in Cincinnati this year, along with his take on the increasing hostility toward his fellow officers.

“Cincinnati’s police officers responded to each of these homicide scenes exposing themselves to unknown physical risk,” he wrote. “Our detectives have spent countless hours trying to find who is responsible for the homicides above along with the seven white victims that I did not list. Your CPD knows that all lives matter.

“How about a sign in support of police officers battling this violence?”

Instead of support, Hils received death threats in the comments section of the Facebook post, Fox 19 reports.

“Like any threat to any person, be it a sworn officer or a civilian, we take all these cases seriously,” Franz said.

Of course, the BLM protest went on as scheduled, with dozens converging downtown to shake their fists and waive signs reading “Justice 4 Sam.”

The rally was designed as a response to Hamilton County Prosecutor Joe Deters’ announcement Tuesday that he would not seek a third trial for Ray Tensing, the University of Cincinnati officer whose case has resulted in two mistrials.

“Now after two trials and probably $1 million, the best lawyers I could come up with were unsuccessful … I have come to a conclusion that we can not win a conviction in this case on these facts,” Deters said, according to WCPO. “I have an ethical duty — if  we believe we cannot be successful at trial, we have that duty not to proceed.”

That decision didn’t sit well with the BLM crowd, which organized the protest to “demand jail time for killer cops” because “we won’t sit by as the city lets another killer cop walk free!” according to the event’s Facebook page.

DuBose’s sister also blasted Tensing as a “racist bigot” and vowed to “be on Ray Tensing’s back for the rest of his life.”

“He is going to suffer,” she said.

“People want to do something. They want to have a say so,” Mingo said. “This helps – the more you hold something in, when it does come out, it’s an explosion. So this is a good release for the people.”

Locals who support Ray Tensing were not afforded the same option, however.

Thousands who planned to attend a public rally for Tensing on Monday were forced to cancel the event because of threats of violence, Cleveland.com reports.

“This decision was made with the safety of our law enforcement personnel being of the highest priority as well as families who frequent the Sawyer Point area,” read a Facebook post from the group Support Ray Tensing.

“This does NOT change our stance on officer Ray Tensing. Thank you to all of the Ray Tensing supporters, as we celebrate yet another victory with the dismissal of the murder and voluntary manslaughter charges.”