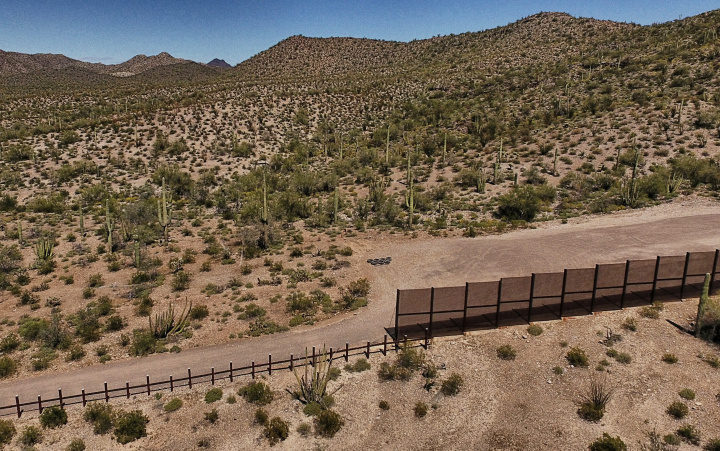 Donald Trump has promised supporters a “Great Wall” on the southern border since the day he announced his presidential campaign.

He promised, “I would build a great wall, and nobody builds walls better than me, believe me, and I’ll build them very inexpensively. I will build a great, great wall on our southern border. And I will have Mexico pay for that wall.”

Today, how does the Trump administration define the wall?

Yes, Trump will build “a wall,” administration officials said, and he is still committed to securing the southern border, but after eight months of his presidency, supporters have no idea what the actual wall will look like.

“President Trump campaigned on and will deliver his promise to the American people to build a wall and gain control of our southern border,” a senior administration official told Breitbart News.

But when asked to define the wall, the official was more diplomatic.

“The prototypes under consideration are intended to demonstrate state of the art options, which may ultimately include a combination of the best features,” the official stated. “Certain types of wall or features may be best suited for some border environments, while other wall types and features might fit other border areas.”

David Lapan, the spokesman for the Department of Homeland Security was more direct.

“‘The Wall’ doesn’t mean a single, monolithic structure, but refers, instead, to a combination of walls, fences, and barriers, complemented by the smart and effective use of technology,” Lapan told Breitbart News.

The DHS has worked carefully for months to redefine Trump’s vision of a “Great Wall” into something more complex and practical.

Trump’s choice for Secretary of Homeland Security General John Kelly took a traditional approach to the wall by requesting feedback from government experts.

After a series of conversations with border officials at DHS and CBP, Kelly explained to the president that a “great wall” was not needed, just more physical infrastructure.

During a Homeland Security committee hearing, Kelly described his conversation with border officials.

“They very definitely said: ‘Yes, sir, we need a physical barrier backed up by people like us — meaning CBP and local law enforcement — with technology where it’s appropriate,” he said in February.

DHS officials frequently refer to a “physical barrier” rather than a wall, as it is a loose term that includes wire and metal fencing, concrete barriers, bollard fences, and levee walls.

“We sort of use those two [terms] interchangeably,” a senior administration official explained to reporters in August when asked about the difference between a fence and a wall on the border. Another official explained that while some structures were called a ”fence” in the past, they are described as a “wall” by border security agents today.

Shortly after taking office, Trump signed an executive order directing the Department of Homeland Security to “take steps to immediately plan, design, and construct a physical wall along the southern border.

Customs and Border Protection responded by bidding out wall prototypes. The process began in March, as officials said it would help the government select the best border security technology possible.

On Tuesday, the Customs and Border Patrol released a video of a backhoe digging near the Otay Mesa Port of Entry in San Diego, California, with the announcement that construction of the prototypes had begun — eight months after Trump signed his executive order.

Six companies have been awarded contracts for four concrete border wall prototypes and four prototypes built of “other materials.” Each structure will be 18-30 feet high.

“Prototyping is an industry-tested approach to identify additional solutions when considering a new product or methodology,” the CBP said in a statement.

Although construction has begun on the wall prototypes, officials are closely guarding images of what they will look like, even though companies have submitted detailed plans for review.

Department of Homeland Security press staff cited “security reasons” when asked why no images of the proposed wall prototypes could be released to the public.

Trump’s campaign rhetoric about his “great wall” made of “hardened concrete,” “rebar,” and “steel” has already changed after several briefings with DHS officials.

Last week, as proof that he was making progress on the wall, the president told supporters in Alabama that he was already fixing existing border infrastructure.

“You know, we have a wall up there now, and we’re renovating it already,” Trump said, explaining that his administration was making it “pristine” and “perfect.”

He confessed that after his conversations with border officials, a “see-through” wall was necessary for border security.

“Frankly, I didn’t know it until about a year ago,” he said, admitting that the “pre-cast concrete wall” he previously proposed would not be good enough to stop drugs.

Trump said that drug cartels were already using catapults to throw drugs over existing walls, where it could hit unsuspecting border patrol agents.

“I think also I have to be honest with you: a see-through wall would look better,” he added.

He explained that the United States did not need to build a wall on a river or over a mountain, as they were natural barriers to prevent border crossings.

Trump highlighted that construction of the wall prototypes started Tuesday and are “just about completed,” promising supporters that he will be personally involved in the selection process.

“I’m going to go out and look at them personally. I’m going to pick the right one,” he said. “We’re renovating the existing wall, and we are going to have as much wall as we need. … We’re going to build the wall. It’s coming along great.”