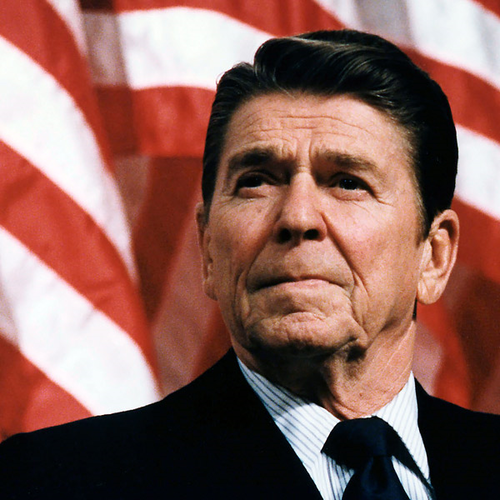 In his 1989 farewell address to the American people, President Ronald Reagan corrected the simplistic notion that he was simply a great communicator by saying: “I wasn’t a great communicator, but I communicated great things,” gathered from “our experience, our wisdom, and our belief in principles that have guided us for two centuries.”

But Reagan was, in fact, a superb orator—one of the most inspiring in American politics, at ease with a formal address to Congress or to the British Parliament, a “fireside chat” with the American people from the Oval Office or a blunt challenge to a foreign adversary.

As we celebrate his birthday this week, I offer some of the “secrets” about his public speaking I have discovered during my decades of writing about our 40th president.

In “Speaking My Mind,” a collection of his speeches, the president readily admitted he had honed his speaking ability while in Hollywood making movies and later as host of the TV program “GE Theater.” He was aware that his political success was due, in part, to his ability to give a good speech based on two things: “to be honest” in what you are saying, and “to be in touch with [your] audience.”

The president emphasized that it was not just “my rhetoric or delivery” that carried him into the White House but that his speeches contained basic truths that the average American instinctively recognized, like the necessity of preserving individual freedom. “What I said simply made sense to the [man] on the street,” he said.

In his early career as a radio broadcaster in Iowa, he discovered a basic rule that he followed all his life: “Talk to your audience, not over their heads or through them. Don’t try to talk in a special language of broadcasting or even of politics, just use normal everyday words.”

On the eve of his election as president, when a reporter asked Reagan what he thought other Americans saw in him, he replied: “Would you laugh if I told you that I think maybe, they see themselves and that I’m one of them.” And he added: “I’ve never been able to detach myself or think that I, somehow, am apart from them.”

Like a popular singer who happily sings a favorite song for his audience, Reagan was a “big believer” in stump speeches because, he explained, your message eventually “will sink into the collective consciousness” of the people. “If you have something you believe in deeply,” he said, “it’s worth repeating time and again until you achieve it. You also get better at delivering it.”

That proved to be the case for his famous “A Time for Choosing” TV address in support of Barry Goldwater, R-Ariz., which he had been delivering throughout California in the fall of 1964.

The choice before the people in the presidential campaign, Reagan said, was simple: “Whether we believe in our capacity for self-government or whether we abandon the American Revolution and confess that a little intellectual elite in a far-distant capital can plan our lives for us better than we can plan them ourselves.”

Has anyone ever presented a more concise argument against the progressive paradigm?

Reagan also addressed and rejected the liberal argument that “we have to choose between a left or right.” “There is no such thing as left or right,” he said. “There’s only an up or down, up to man’s age-old dream of individual freedom consistent with law and order, or down to the ant heap of totalitarianism.”

Is it any wonder that after hearing Reagan speak, voters flooded the Goldwater campaign headquarters with telegrams, letters, and checks totaling $1 million and urgently requesting copies of the Reagan address to replay in their towns and communities?

Here is another “secret” of the Great Communicator. Before his Oval Office talks, an aide would bring the president a glass of water wrapped in a small towel. Why wrapped? Because the water was warm—almost hot—calculated to relax his vocal chords. He had adopted this procedure on the advice of a Hollywood friend who knew something about the voice—Frank Sinatra.

And where did the quotations, aphorisms, and excerpts that Reagan used so effectively come from?

While some were provided by his speechwriters, most of them came from a private collection of 4×6 note cards personally written by the president. Presidential aides had long heard about the notes collection, but not until the spring of 2010 were the notes found by the Ronald Reagan Presidential Library staff in a cardboard box marked only “RR’s desk.”

We are indebted to historian and Reagan biographer Douglas Brinkley for arranging and publishing them as “The Notes: Ronald Reagan’s Private Collection of Stories and Wisdom.”

Taken from books, magazines, speeches, and even poems, the notes reflect Reagan’s firm faith and perennial optimism about work, marriage, and family. There are classic one-liners like “Flattery is what makes husbands out of bachelors” and “Money may not buy you friends, but it will help you to stay in contact with your children.”

There is historical wisdom like Winston Churchill’s observation that “when great forces are on the move in the world we learn we are spirits not animals. There is something going on in time and space and beyond time and space which whether we like it or not spells duty.”

There are quotes from surprising sources like the 19th-century French free-market economist Frederic Bastiat, who wrote: “People are beginning to realize that the apparatus of government is costly. But what they do not know is that the burden falls inevitably on them.”

And quotes from likely sources like the revolutionary American pamphleteer Thomas Paine who wrote, “We have it in our power to begin the world over again.”

And there is the Scottish ballad which Reagan quoted to his grieving campaign staff in 1976 after he narrowly lost the Republican presidential nomination to Gerald Ford: “I am hurt but I am not slain. I’ll lay me down and bleed a while and then I’ll rise and fight again.”

That’s exactly what he did four years later when he won the GOP presidential nomination and then the presidency, commencing upon eight years in the White House, which some historians have described as the “age of Reagan.”

As Reagan made clear, a good speech must be truthful. It must not pander to the emotions. It must take into account the audience’s mood and guide their passions and imagination, while using the words of the common man.

A great speech must be concerned with great things—first principles such as liberty, justice, and equality, principles that have shaped America from the very beginning, and still do today.

Here, then, are some of the secrets of the Great Communicator, Ronald Reagan, whose eloquent voice is not stilled but remains available to us any day and hour through YouTube and other social media.