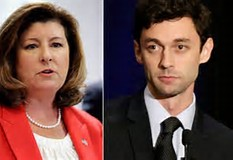 Please enjoy this memorable moment from last night’s debate in Georgia’s Sixth Congressional District, wherein Republican Karen Handel cheekily asks Democrat Jon Ossoff how he intends to vote in the June 20th runoff — knowing full well that he’s ineligible due to living outside of the district. It’s an obvious gotcha, given this vulnerability that the GOP has been hammering at for weeks, yet the young liberal seemed momentarily flummoxed by it.

If you watch the full clip, after an awkwardly long pause in which Ossoff appeared to process the fact that he can’t give the simple answer of “myself,” he launches into his talking points about how an why he doesn’t reside in the district he wishes to represent — including a counterattack that Handel was born in Washington, DC. She was ready for that one, explaining that infants can’t choose where they’re born, adding that she’s lived in Georgia for most of Ossoff’s entire life. Then she pressed harder on his out-of-state donations from blue state liberals. Fact check — true.

The other exchange worth highlighting is Handel’s response to Ossoff’s challenges on Obamacare repeal and “women’s health” issues. Ossoff, who supports the failing Obamacare law, tried to knock her onto a defensive footing regarding pre-existing conditions and her anti-Planned Parenthood leadership at the Susan G. Komen foundation.

Like Paul Ryan on Medicare reform, she personalized the issue, stressing that of course she wouldn’t support a bill that would harm her sister, who was born with a serious pre-existing condition. She rejected Ossoff’s false premise that the AHCA “guts” protections for people with preexisting conditions, listing several of the relevant major protections in the legislation. The Democrat also predictably mentioned the CBO score that liberals have claimed shows that 23 million people would “lose” their coverage under the GOP proposal, another rank distortion. For good measure, he also repeated a version of the debunked Planned Parenthood-breast cancer screenings myth, which led to her passionate defense of her record on women’s health — punctuated with a pointed refusal to be lectured to on such issues by him or anybody else. Perhaps Jon Ossoff made a good strategic move in running away from his tough talk on debates, although Handel put her foot in her mouth by handing the opposition a ready-made soundbyte about opposing a “livable wage.”  Polls show an extremely close race in this traditionally-Republican but heavily Trump-skeptical district. Democrats correctly see it as their best chance to flip a red seat prior to the midterms, having failed to do so in several previous special election attempts.