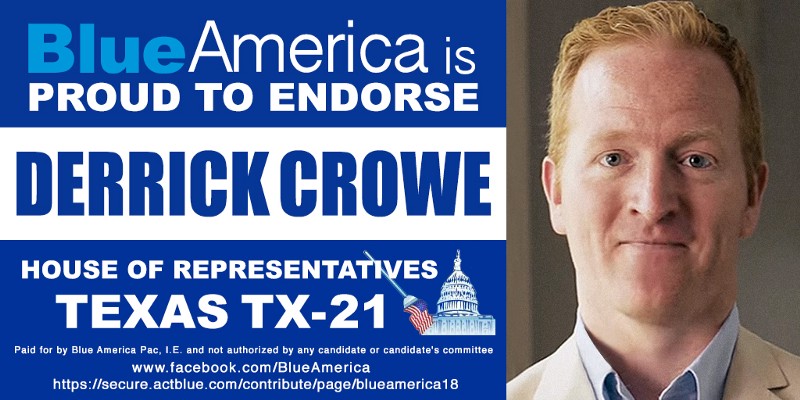 Several hundred communists and socialists will run for public office on the Democratic Party ticket this year. One of them is Derrick Crowe, who is vying for a seat in the U.S. House of Representatives, from Texas Hill Country’s 21st Congressional District.

Despite running as a Democrat, Derrick Crowe is a member of this country’s largest Marxist organization, Democratic Socialists of America (DSA) – a fact not revealed in his campaign literature. The leadership of Our Revolution, a several hundred thousand strong DSA-Front organization, has also endorsed Derrick Crowe.

District 21 is based in Texas Hill Country just north of San Antonio. It is an open seat with 4 Democratic primary candidates and more than a dozen Republicans. It’s been a safe Republican seat, represented by Lamar Smith and is considered unlikely to flip this election cycle. The fact that Derrick Crowe has the support of approximately 900 DSA members in the San Antonio/Austin area and if he wins the primary – more than 30,000 comrades nationwide – may make for some surprises.

Derrick Crowe’s website bio portrays him as a guardian of America’s national security.

“Derrick worked in Washington, D.C. for senior Democrats, including House Democratic Leader Nancy Pelosi (D-Calif.) and the top Democrats on agriculture (Charlie Stenholm) and counter-terrorism (Adam Smith). As a staffer, he contributed to the defense of Social Security and Medicare against Republican privatization pushes. As a senior communications professional, he participated in the messaging effort that helped Democrats retake the House in 2006. He also prepared senior Democrats to serve as national security surrogates for then-Senator Barack Obama‘s presidential campaign.