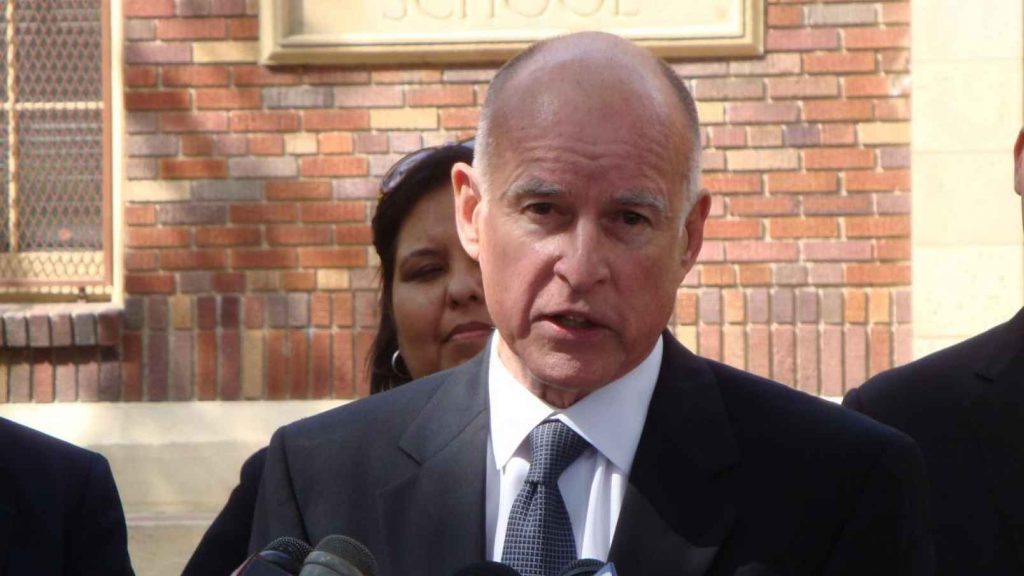 On Christmas Eve, California governor Jerry Brown issued 132 pardons and 19 commutations, the latest in the 1,059 pardons and 37 commutations he has granted since regaining office in 2011. Brown thus surpasses the 404 pardons and one commutation during his previous terms as governor (1975 to 1983), and far exceeds the combined 15 pardons and 14 commutations from 1991 through 2010 under governors Pete Wilson, Gray Davis and Arnold Schwarzenegger.

Jerry Brown ran for president in 1976, 1980, and 1992 but came up a loser every time. The pardon binge doubtless helps the recurring governor feel the power but there’s more to his story. In an axis with the illegal lobby, Brown seeks to return those already deported to the United States, even those guilty of gun violence.

Hector Barajas entered the country illegally and served in U.S. Army from 1995-2001. After discharge, he developed a “substance abuse” problem and was convicted of shooting at an inhabited vehicle, serving more than a year in prison. Deported in 2004, Barajas reentered the USA illegally and was deported again in 2010. From Mexico, Barajas applied for executive clemency in the form of a gubernatorial pardon, which Brown granted this year, claiming that since jail Barajas has “lived an honest and upright life, exhibited good moral character and conducted himself as a law-abiding citizen.”

This year Jerry Brown signed a package of stringent new gun laws, including restrictions on ammunition. On the other hand, the governor looked the other way at the Mexican national’s use of a firearm in the commission of a crime. As it happens, this is not a new development for Brown.

In 2015, criminal illegal Jose Ines Garcia Zarate, a repeat deportee who found sanctuary in San Francisco, discharged a stolen handgun and took the life of Kate Steinle. A San Francisco jury recently found the Mexican national not guilty on all murder and manslaughter charges. The shooter’s lawyer now seeks to have even the gun possession conviction tossed. The verdict sparked widespread outrage, but governor Jerry Brown issued no statement denouncing gun violence by the illegal Garcia Zarate, a career criminal.

In December 2015 Muslim terrorists Syed Farook and Tashfeen Malik opened fire at a Christmas party in San Bernardino, killing 14 and wounding many others. Brown called it a “terrorist attack,” but did not specifically decry the terrorists’ use of firearms.

Brown told reporters “I’m going to be spending some time making sure that our federal-state collaboration really is working,” but the next day he flew to Paris for a conference on climate change, an issue he considers more important than protecting citizens from violence. In 2017, Brown signed the sanctuary state legislation that shelters violent criminals from federal authorities seeking to deport them. For Brown, such sanctuary was a not a new concept.

In 1975, American Indian Movement leader Dennis Banks fled to California after a courthouse gun battle in South Dakota. California governor Jerry Brown refused to extradite Banks, allowing the fugitive to avoid prosecution. Banks, who passed away in October, did serve time for the violent offences, but former Jesuit seminarian Jerry Brown expressed no regret about giving him sanctuary.

Brown has a reputation as something of a centrist but his pardons for violent criminals reveal him as a man of the left. As Orwell said, rats are comrades, victims of capitalist society, and they come in handy when it’s time to do the heavy lifting. Even in California, that’s not where the people are.

Brown’s first choice for chief justice of the state supreme court was his former campaign chauffer Rose Bird. She proceeded to nullify every death sentence that came before her, including the case of Theodore Frank, duly convicted of kidnaping, torturing, raping, murdering and mutilating two-year-old Amy Sue Seitz. In 1986 California voters tossed Bird from office along with Brown’s supreme court picks Joseph Grodin and Cruz Reynoso.

In light of San Bernardino, the Steinle verdict and the sanctuary legislation, any observer could be forgiven for believing that Jerry Brown cares more about the concerns of criminal illegals than the legitimate citizens they victimize. The governor’s pardon spree fits the pattern.

The California Democratic Party has come to resemble Mexico’s ruling PRI party, which supports unfettered illegal immigration to the United States. Democrats have come to depend on the votes of illegals such as Gustavo Araujo, who used false documents for 25 years and voted illegally in federal, state, and local elections. How many others have done likewise remains uncertain because California secretary of state Alex Padilla refuses to reveal voter records. Like officials in other states, he is afraid the true figures may confirm President Trump’s claim that some three million illegals voted in 2016.

Jerry Brown ends his final term in 2018 and leaves behind a massive water tunnel project, a boondoggle bullet train, the nation’s highest state income and sales taxes, and fathomless public pension debt. He also bequeaths a virtual one-party state that not only protects and privileges criminal illegals but seeks to reimport them after deportation. That could be the true legacy of this hereditary, recurring non-leader.