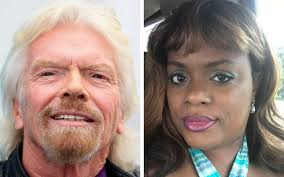 Hey, what do you know? Yet another rich and powerful liberal douche is accused of sexually assaulting a woman. This time it’s billionaire kook and Obama bestie Richard Branson. He allegedly stuck his face between a woman’s breasts and motorboated them. You’d think a rich asshole like him would be more into yachts, but apparently not.

Antonia Jenae is a backup singer for superstar Joss Stone. I don’t actually know who Joss Stone is, but the news informs me that she’s a superstar so let’s go with that. In any case, Stone and her band, including Jenae were invited to an island getaway with Branson, which turned out to be less fun than anticipated.

The Sun reports things started off bad when Jenae was in the pool with Branson:

“Richard Branson tried to get me to show him my boobs and I said: ‘No!’ I was wearing a one-piece swimsuit and at the time I was very heavy chested,” said Janae.

And she’s not kidding about being “heavy chested.” as you can see.

Those heavy breasts would soon be a part of another problem:

“We were by the bar and he was saying bye to everyone. He came up to me and put his face in my breasts. He went ‘brrrrrr’ and just walked away. It was surreal, totally out of the blue. Joss and I were like, ‘What the hell was that?!’ Everyone was wondering why I wasn’t angry because I’m usually a firebrand. But I was just too shocked,” Janae said.

This was witnessed by Stone as well:

Superstar Joss Stone was with stunned onlookers who saw Sir Richard Branson “motorboat” backing singer, Antonia Jenae, by sticking his face in her boobs and shaking it vigorously while blowing  raspberries…

The singer said she and Joss, 30, recorded a video shortly after to capture their astonishment.

Branson, like all liberal perverts, doesn’t deny the incident but apologized anyway.

“Richard has no recollection of this matter. Neither do his family and friends who were with him at the time. There would never have been any intention to offend or make anyone feel uncomfortable. Richard apologises if anyone felt that way,” said Branson’s people in a statement.

I’m not sure these liberals quite get how to deny something. If you didn’t do the deed, don’t apologize for it. Harvey Weinstein, Al Franken, Jesse Jackson, and really all of them lefty pervs have done the exact same thing. From a legal standpoint, this is what is called an admission of guilt.

Liberals can be excused for this because they know the media and their normally outraged comrades will never hold them accountable for their horrible actions. Republicans like Donald Trump and Roy Moore have flat out denied the allegations against them but liberals treat them like they are guilty. The liberals accused of sexual assault have more or less admitted to it and liberals act like it’s not a big deal. Funny how that works out, isn’t it?

If you remember, Richard Branson invited the Obamas to hang out with him on his private island after they left the White House. I wonder if he also motorboated Michelle. Well, maybe Michelle’s balls.