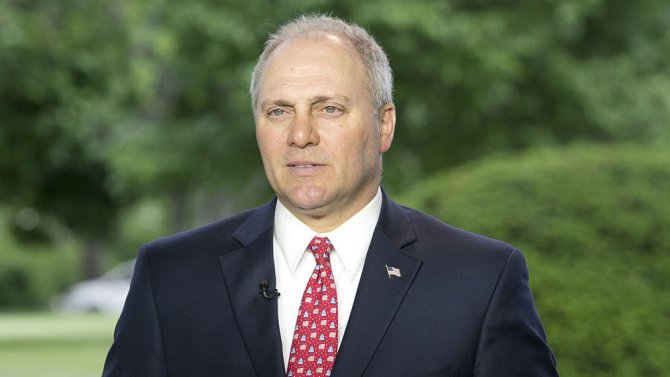 In the early hours of June 14, James T. Hodgkinson opened fire on Republican congressmen who were practicing for a charity baseball event. In total, five were wounded, including Rep. Steve Scalise, whose gunshot wound to the hip was considered life-threatening.

Hodgkinson was later killed by police during an exchange of gunfire.

Following multiple surgeries, Scalise was placed in the intensive care unit (ICU). Although the congressman was moved out of the ICU on June 22, in early July he was readmitted “due to new concerns for infection,” reported MedStar Washington Hospital Center. “His condition is listed as serious.”

Fortunately, Scalise is now out of the woods and on the road to recovery.

During a CNN town hall on Monday, Jake Tapper asked Speaker of the House Paul Ryan (R-WI) if Scalise would be able to walk again, to which Ryan replied: “Yeah, he’s gonna walk, but he’s gonna have to relearn how to do it.” Ryan added, “I won’t go into the details of the multiple operations he’s had, but yeah, he’s gonna walk.”

The Wall Street Journal reports that Scalise “joined a conference call of House Republicans on Monday to talk about the fall agenda, the first time many of them had heard his voice since the June shooting.”

Ryan said of the conference call:

It was really very emotional for us. I’ve been seeing and visiting with and talking with Steve myself, but most of our members hadn’t had a chance to even hear his voice. … He’s gonna be okay, but he’s in a rehab hospital now, out of the Intensive Care Unit — and he’s just got a long road ahead of him, but he’s gonna be okay. He is very strong and sound of mind, and his body’s healing. And I’ve got to tell you, it was extremely cathartic for all of us, and our members were really, really relieved just to hear his voice.

Thanks @SpeakerRyan and @JakeTapper for the prayers and encouragement – looking forward to being back when I'm able. pic.twitter.com/bSlQJaAZos

Scalise will return to the House when he is able.