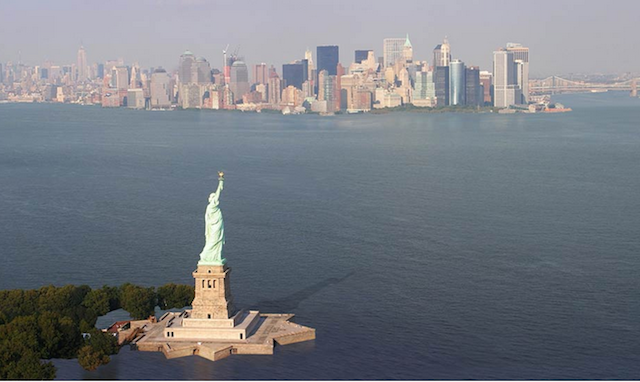 New York City, Boston, San Francisco, and Miami are among the U.S. cities that a group of scientists said could disappear because of rising waters caused by man-made climate change.

“Residents of roughly 500 cities across the US will be faced with the same choices by the end of the century: whether to mitigate or to abandon their homes,” CNN reported on a study released on Wednesday by the Union of Concerned Scientists (USC).

CNN reported that “scientists have been trying to get people to wake up to the dangers that lie ahead in rising seas due to climate change.”

The scientists’ report has “a comprehensive list [that] now names hundreds of US cities, large and small, that may not make it through the next 20, 50 or 80 years due to sea level rise,” CNN reported.

CNN reported that 90 U.S. communities are considered “inundated today,” mostly in Louisiana and Maryland, where allegedly seas are rising and the land is sinking.

By the end of the century more than 50 cities with populations of more than 100,000 could be affected. Cities like Boston; Fort Lauderdale, Florida; and four of the five boroughs of New York will be considered inundated. Although the West Coast seems to be spared the brunt of inundation over the next few decades, even places like San Francisco and Los Angeles will be on the list by 2100.

CNN reported that scientists were “alarmed” by President Donald Trump’s withdrawal from the Paris climate agreement, which they support.

“If we act today to achieve the temperature and emissions reductions goals outlined in the Paris climate agreement, and succeed in slowing the acceleration of sea level rise, about 380 communities could avoid chronic inundation this century,” the study states.