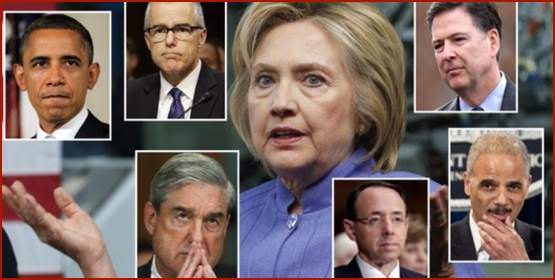 The Washington Post published a bombshell on the discredited Trump dossier on Tuesday.

The Post reported that Clinton campaign and DNC lawyer Marc Elias and his law firm Perkins Coie paid Fusion GPS to continue researching Trump after a Republican donor who originally funded the research pulled out in April 2016.

Tonight Sean Hannity told his audience: “People Will Be Going to Jail” Over Uranium One Scandal.

Sean Hannity: Here’s my prediction tonight. People will be going to jail over this… Congress has a duty, a moral obligation, you can’t have a dual justice system. They must investigate these scandals fully and they must uncover the truth of what actually happened. How is it possible, how? That they never recognized that giving Vladimir Putin and the Russians 20 % of our uranium, the material for nuclear weapons, a hostile actor is a good idea? And with Uranium One Congress can start by calling on key Obama administration officials. Eric Holder, Rod Rosenstein and, yes, Robert Mueller, I hope you’re watching!