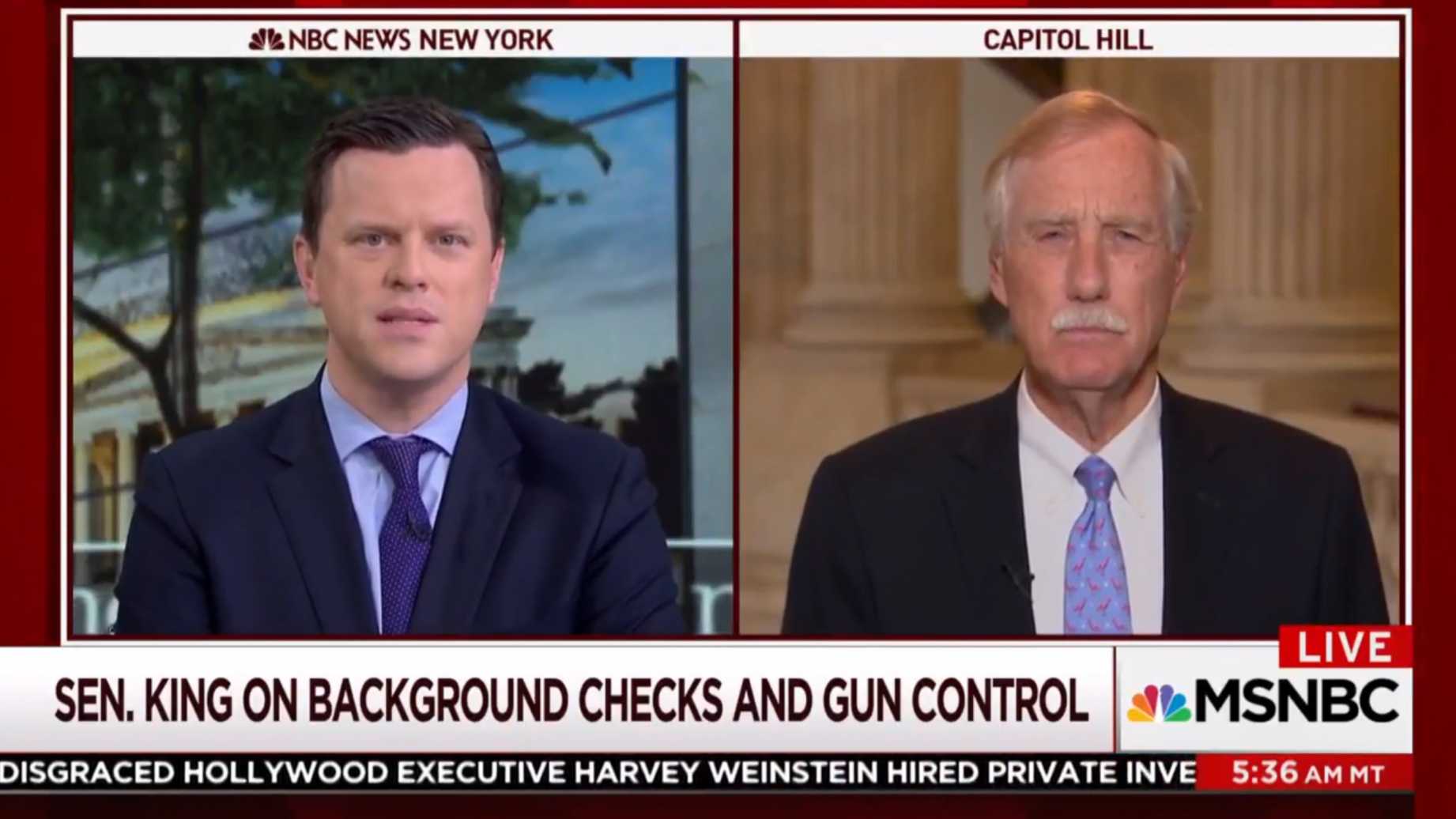 GEIST: [Gun] control advocates [are] saying there’s no reason for a private citizen to own a military-style weapon, the type he used, an AR-15 style weapon in that church. Do you think it’s time for those to be banned, Senator?

KING: No, I think we’ve got to look at that carefully. Here’s the problem — I’m from a state where we have one of the highest gun ownership rates in the country, and yet we have one of the lowest rates of gun crime. An assault weapon — it’s called an assault weapon, but it’s simply a semi-automatic hunting rifle in costume with a different kind of stock, but the functionality of the weapon is exactly the same as … [those] that are used by legitimate hunters.

So, I have a problem with banning a weapon because of its appearance. And one of the problems we had when they did it before was, they change the appearance a little bit and the ban doesn’t apply.

After King spoke about the solutions he would prescribe, such as magazine limitations, Geist continued the conversation as if the senator hadn’t already explained why an “assault weapons” ban doesn’t make sense.

GEIST: Senator, do the hunters you talk to in Maine — it’s a sincere question — do they say they need an AR-15 to hunt deer?

KING: No, they don’t. Of course they don’t. But the point is that it’s the same gun, it just looks different … they use a more conventional semi-automatic rifle.

The 1994 federal assault weapons ban, to which King alluded in his exchange with Geist, was a near-useless law.

Sean Davis of The Federalist writes:

The [law] banned semi-automatic rifles only if they had any two of the following five features in addition to a detachable magazine: a collapsible stock, a pistol grip, a bayonet mount, a flash suppressor, or a grenade launcher. That’s it. Not one of those cosmetic features has anything whatsoever to do with how or what a gun fires.

The law, which expired in 2004, had little to no effect on gun violence.

A 2004 Department of Justice-funded study conducted by Christopher S. Koper, Daniel J. Woods, and Jeffrey A. Roth noted that the weapons banned by the 1994 law only covered between 2% to 8% of the firearms used in crimes. Moreover, the study concluded that “should it be renewed, the ban’s effects on gun violence are likely to be small at best and perhaps too small for reliable measurement. AWs [assault weapons] were rarely used in gun crimes even before the ban.”

Although the ban also covered some LCMs (large capacity magazines), the primary focus was “military-style assault weapons,” which, as stated by King and Davis, are cosmetically but not functionally different from other semi-automatic rifles.

The progressive movement’s “assault weapons” war is one giant straw man which is used to convince voters that scary-looking rifles are more dangerous than other semi-automatic firearms, and that Democratic politicians are the only ones who care enough to do anything to protect the American people.