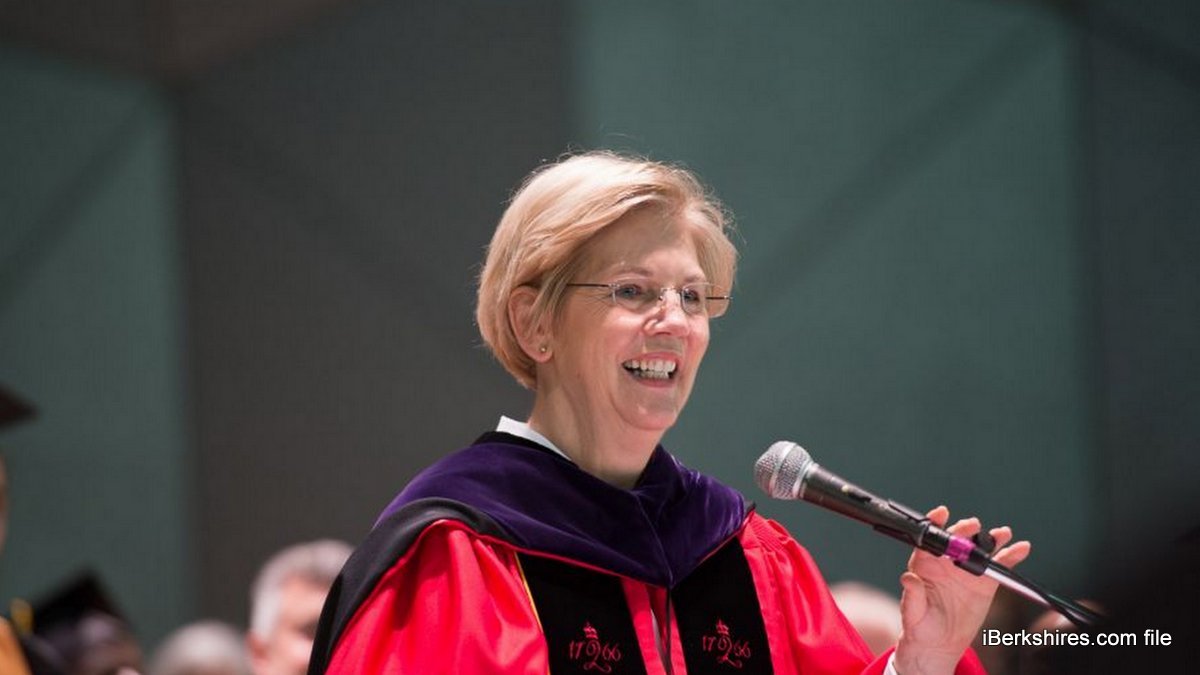 800 turn out to hear the senator speak at Berkshire Community College.

PITTSFIELD — “The point is that we must persist.”

That was the message from U.S. Sen. Elizabeth Warren, D-Mass., in a town hall in Pittsfield on Saturday.

Just over 800 Berkshire residents turned out for the 10:30 a.m. event at the Robert Boland Theatre in Berkshire Community College’s Koussevitzky Arts Center. A crowd of about 600 made it into the theater; the remaining 200 filled an overflow room and lined up outside.
“Sen. Warren spoke to the people who couldn’t get in,” said Everett Handford, Warren’s regional director for western Massachusetts.

Pittsfield Mayor Linda Tyer introduced Warren with a call to action for the Berkshires.

Invoking the Four Freedoms first articulated by Franklin D. Roosevelt in his Annual Message to Congress in 1941 and then immortalized by Norman Rockwell in a series of paintings by that name, Tyer said now, more than ever, Americans must embrace the freedom of speech, freedom to practice religion, freedom from want and freedom from fear.

After brief remarks, the senator answered questions on a wide range of topics. Health care and political action against the administration of President Donald Trump dominated the conversation. The senator cautioned the audience on what to expect from the latter.

“Keep in mind that right behind Trump is another republican who does not share our values,” said Warren. “You get to fight because it’s the fight that matters.”

Her remarks on resistance echoed in the theater — especially to Helen Haerhan Moon, a candidate for the Pittsfield City Council Ward 1 seat.

“As a young woman getting involved in Massachusetts politics, hearing Elizabeth Warren is inspiring,” Moon told The Eagle.

Warren told the crowd that there’s still much to be done to keep up the fight against the Republican agenda — especially now that the GOP has released their version of health care legislation.

“If this is not the time to stand up and fight back, then I don’t know when it comes,” said Warren.

Warren listed a number of legislative fixes for health care and told the crowd Democrats would fight to preserve their access to medical care.

“We are a country determined to build a future where healthcare is a human right,” said Warren.

The senator referred to the GOP health care plan as a tax cut for the rich. Republican lawmakers argue that their plan will lower rates and offer consumers more choices. The Government Accounting Office determined that the GOP plan would cause 22 million people to lose health insurance in ten years.

Pushing back on the GOP plan requires personalizing the issue, said Warren.

“If you’re touched by Medicare or Medicaid, put your face on it,” said Warren. “I am the face of Medicaid. That’s what we need to see.”

The president and Republicans campaigned in the 2016 general election on the promise of repealing the Democratic health care legislation on “day one,” Warren pointed out.

“Day one has come and gone,” she said. “And they have not repealed Obamacare.”

Health care was a priority for the late state Rep. Gailanne Cariddi, a Democrat from North Adams who died in June after a short battle with cancer. She represented the 1st Berkshire District in the House from 2010 to 2017 and served 21 years on the North Adams City Council. State Rep. Tricia Farley Bouvier, D-Pittsfield, and state Rep. Paul Mark, D-Peru, delivered remarks in Cariddi’s memory.

“She fought really hard for her district,” said Farley-Bouvier.

Warren, who got enthusiastic applause when she told the crowd she is running for re-election in 2018, has developed a high profile on the national stage. Well known for her pointed questioning of financial institutions and professionals in her position on the Committee on Banking, Housing, & Urban Affairs, Warren is frequently mentioned as a potential presidential contender in 2020.

That profile did not go unnoticed on Saturday.

“I want to take a moment to acknowledge the impact that our senator has on the national conversation,” said state Sen. Adam Hinds, D-Pittsfield, who facilitated the town hall.

Warren also answered questions on a number of other topics of interest to constituents.

Asked about the Syrian War and the U.S. efforts to handle the conflict, Warren said, “The U.S. needs a coherent strategy. It’s not coherent to have our next tactical move planned with no plan for what happens next.”

Complicating matters, said the senator, is the fact that Russia is involved in the region, and the relationship between the two countries is strained.

The investigation into Russian efforts to influence the 2016 U.S. election is ongoing, Warren told the crowd.

“We’re waiting for the other shoe to drop,” Warren said. “It’s like a centipede with all the shoes dropping.”

Jimmy Jay, an intern with Tyer’s office and a local high school student, asked the senator about college tuition. The cost of higher education is prohibitive, said Jay.

The senator said it was time for the nation to recommit to students,

“I am the daughter of a janitor who ended up as a college professor and a United States senator because the United States invested in education,” said Warren.

Warren delivered a call to action in response to a question of what to do with political energy.