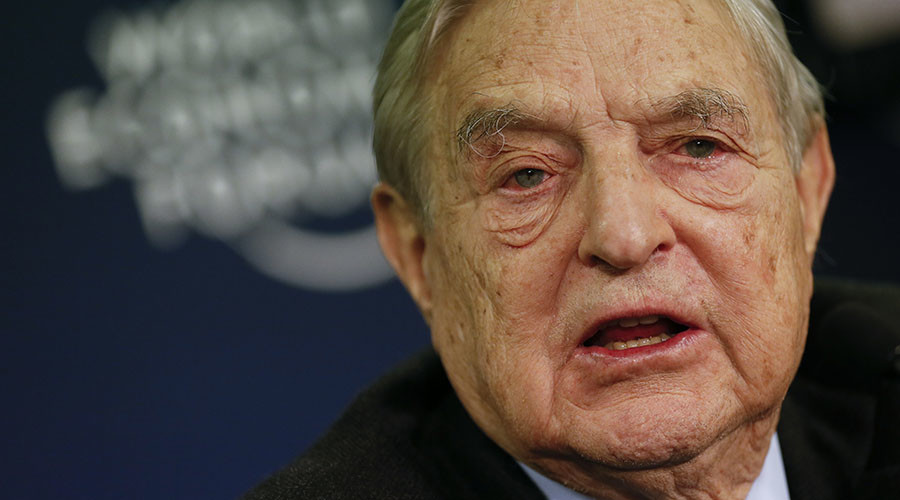 The liberal media would have you believe Russian involvement in the U.S. is new and tied solely to the Trump administration. But records from 2010 and 2011 reveal Russia may have funded U.S.-based environmental groups, 10 of which are also backed by liberal billionaire George Soros.

Republican Reps. Lamar Smith and Randy Weber sent a letter to Treasury Secretary Steve Mnuchin on June 29, requesting he investigate allegations that Russia has financially backed anti-fracking campaigns in the U.S. in an attempt to “safeguard the influence of the Russian oil and gas sector.” Smith and Weber are chairmen of the House Committee on Science, Space and Technology.

“According to reports, entities connected to the Russian government are using a shell company registered in Bermuda, Klein LTD. (Klein), to funnel tens of millions of dollars to a U.S.-based 501(c)(3) private foundation, the Sea Change Foundation,” the letter stated.

Klein’s attorney denied the firm had any connection to the Russian government or Russian gas and oil interests in a June 11, 2017, email to The Washington Times.

But if true, the allegations could rock the environmental movement.

Sea Change Foundation tax forms showed it received $23 million from Klein in 2010 and 2011. Sea Change’s only other donor was Nathaniel Simons, the foundation’s founder and president. Sea Change’s website lists no contact or grantmaking information, and declares “The Foundation does not accept unsolicited proposals.”

Not surprisingly, many of the groups funded by sea change take a strong anti-fracking stance. For example, the Natural Resources Defense Council (NRDC) launched a “Community Fracking Defense Project” in September 2012. The project helps communities “craft effective anti-fracking laws” and goes to court “to support citizens’ rights to limit oil and gas development in their towns.” Ultimately the NRDC wants a complete ban on fracking.

League of Conservation Voters, Center for American Progress and Union of Concerned Scientists have all advocated for stronger regulations on fracking as well. 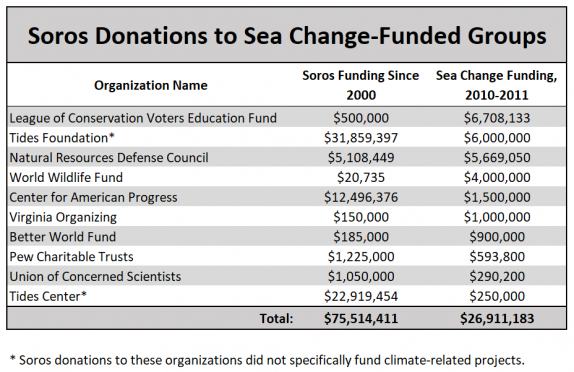 In 2010 and 2011, Sea Change gave away nearly $100 million to the Tides Foundation, the Sierra Club Foundation, the Energy Foundation and 34 other groups, according to Foundation Directory. At least eight of those groups received more than $20.7 million from Soros combined.

The left-wing billionaire has given tens of millions to climate change groups since 2000.

The steering committee members of the left-wing People’s Climate March in April 2017 received more than $36 million from Soros between 2000 and 2014. Many of those same Soros-funded groups partnered for Earth Day events as well.

Groups that Soros and Sea Change fund are led by some of the most prominent left-wing media figures and celebrities. For example, CNN founder Ted Turner is the board of directors chairman at the Better World Fund. The Center for American Progress board, meanwhile, includes Democrat Senator Tom Daschle, former-Clinton campaign chairman John Podesta and billionaire climate-alarmist Tom Steyer.

Russia Funding Anti-Fracking Is Nothing New

Klein itself, the company behind the donations, was incorporated by two attorneys from the law firm, Wakefield Quin, which has “deep connections” to both the Russian government and the Russian oil and gas industry, according to Smith and Weber.

Despite the Committee on Science, Space and Technology’s letter, the broadcast networks have ignored the story.

Since June 29, 2017, when the letter was sent, ABC, CBS and NBC morning and evening news shows have been silent about it, despite running multiple stories on whether the Trump campaign colluded with Russian officials during the election.

Major outlets like The New York Times, USA Today, The Washington Post and The Wall Street Journal have ignored the letter, even though its contents weren’t entirely new.

The Washington Free Beacon first reported on Klein’s mysterious donations to Sea Change on Aug. 1, 2013. A spokesperson for the company “would not say exactly what Klein does or from where it derives its revenue,” Free Beacon writer Lachlan Markay stated.

Markay made the connection to Russia a year and a half later.

“A shadowy Bermudan company that has funneled tens of millions of dollars to anti-fracking environmentalist groups in the United States is run by executives with deep ties to Russian oil interests and offshore money laundering schemes involving members of President Vladimir Putin’s inner circle,” he reported January 2015.

Leaked emails from Hillary Clinton’s staff reveal Clinton gave a speech in June 2014 where she admitted the State Department was aware of “phony environmental groups” funded by Russia.

“We were even up against phony environmental groups, and I’m a big environmentalist, but these were funded by the Russians to stand against any effort, oh that pipeline, that fracking, that whatever will be a problem for you and a lot of the money supporting that message was coming from Russia,” Clinton told a private audience in Canada.

After the emails were released in October 2016, FrackNation directors Magdalena Segieda, Phelim McAleer and Ann McElhinney released a statement demanding “Hillary Clinton and the State Department to release the names of all anti-fracking organization [sic] funded by Putin’s Russia.”

FrackNation was a 2014 documentary which presented arguments both for and against hydraulic fracturing, or “fracking.” At the time of its release it was criticized for including British journalists who suspected Russia was funding anti-fracking campaigns.

Nevertheless it is widely know that Russia, and Putin specifically, dislike other countries using fracking.

The Daily Beast reported in 2014 that Putin “hates fracking—at least, he hates it when other countries do it” because it threatened demand for Russia’s oil and gas. One of Russia’s key exports is selling natural gas to Europe.

“[C]ircumstantial evidence, plus large dollops of Cold War-style suspicion, have added to mounting alarm over covert Russian meddling to block threats to its energy stranglehold on Europe,” New York Times Moscow correspondent Andrew Higgins wrote in November 2014. At the time, Russia was suspected of funding fracking protests in Romania.

“As weird as it sounds for Russia to throw in with American and British environmental activists, it may be a case of the-enemy-of-my-enemy-is-my-friend, at least from the Russian perspective,” author Eric Roston wrote.